Despite pretensions of social commentary, with a heavy sprinkling of #MeToo, this is not much different from a feminist version of one of those Lifetime movies. Y’know, with a title like Stalked by My Husband’s Ex. There’s a heroine that nobody believes, whose life is ruthlessly dismantled by her enemy. Then, in the final reel, she takes matters into her own hands, and defeats her nemesis. Of course here, the enemy is a world-class expert in optics, Adrian Griffin (Jackson-Cohen), who fakes his own suicide, then somehow single-handedly creates an invisibility suit (while pretending to be dead!), and chooses to use it, solely to make his former girlfriend’s life miserable. This ranges from turning up the gas on the stove, to framing her for a spot of throat-slitting with that old staple, the Psycho carving-knife. 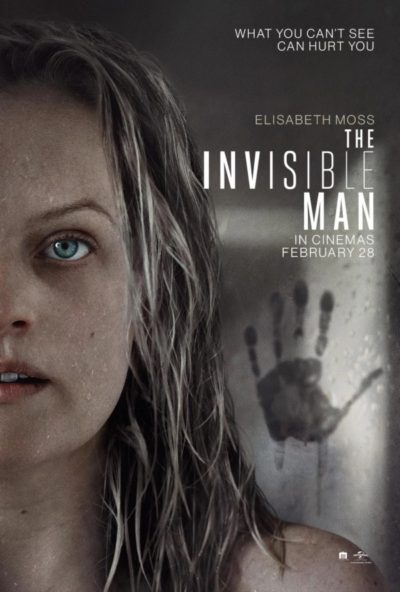 Yep, that escalated quickly. All of a sudden, Stalked by My Husband’s Ex seems like a Christopher Nolan-like masterpiece of credible plotting. Now, this isn’t necessarily a bad thing. I love me some bunny-boiling schlock and awe. But here, I repeatedly found myself thinking how it would have been considerably more subversive if the victim, fashion designer Cecilia Kass (Moss), had actually been the loony everyone else thinks she is. Or even if they’d called the film something else. As is, the title means the audience are ahead of Cecilia from the get-go. We have to wait for her to catch up, and figure out what the viewer already knows… because it was printed on the ticket-stub. It’s partly why this runs 124 minutes. Which is about 35 more than Stalked by My Husband’s Ex, incidentally.

Part of the problem is that Griffin is never established as a bad guy. Yeah, I know the whole #BelieveWomen thing (unless the culprit is Joe Biden, apparently, in which case – hello, carpet!). But there’s a difference between societal standards and cinematic convention. And the latter states that a villain first needs to be seen being villainous, in order to be one. Show, don’t tell? Instead, Cecilia does an awful lot of telling here. As a result, I have to admit being almost impressed by the throat-slitting mentioned above. It shows some style and a sense of spectacle, that merits un certain regard, as they say.

I did enjoy the bits where Cecilia is trying to figure out what is going on, and convince anyone else of it. Moss does a fine job of portraying someone who is disintegrating under pressure. However, the longer this goes on, the more ludicrous it becomes. At one stage it seems to be trying to turn Cecilia into Sarah Connor from Terminator 2, then decides that simply blowing the (or, at least, a) bad guy away, isn’t justice enough. The finale subsequently tacked on, is clearly intended to provoke some kind of #GirlPower high-fiving, yet I found it less satisfying than the one in Stalked by My Husband’s Ex. I just wish the nemesis in that had possessed an invisibility suit….