It seems I’m about the only person in the world who was largely unimpressed with this Pixar film which, for me, continues the studio’s downward spiral that has now been going on since Up. At first, the decline was relatively subtle – at least, if you ignore the painful merchandising grab which was Cars 2. Brave and Toy Story 3 were still extremely solid, falling short only relatively, in comparison to the previously insanely high standard of the studio. But Monsters University can only be described as a severe disappointment, and since then, we’ve had another underwhelming sequel in Finding Dory, and now this poorly-thought out concept [I haven’t seen The Good Dinosaur, and likely won’t. I didn’t enjoy it much the first time I saw it, when it was called The Land Before Time]. 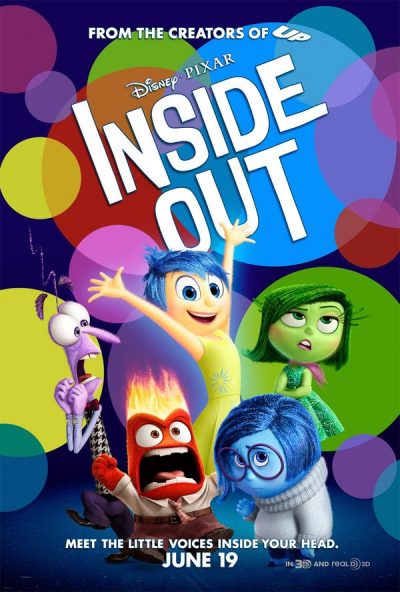 The film largely takes place inside the head-space of an 11-year-old girl called Riley, who has just moved from Minnesota to San Francisco with her parents – and is none too happy with the life change. She is driven by her emotions, led by Joy (Poehler), but also including Sadness (Smith), Anger (Black), Fear and Disgust. After a traumatizing experience on Riley’s first day at her new school, Joy and Sadness find themselves lost in the warren-like maze of long-term memory. They have to try and make their way back to the control room, with the help of Riley’s all but forgotten imaginary friend, Bing Bong (Kind), before the remaining emotions cause Riley to make a decision she’s going to regret.

I think the issue here is that each of these characters is really only a splinter of a “true” character. When you reduce anyone to a single emotion, they become one-dimensional. Sadness, for example, comes over as more like a Pixar version of Eeyore than anything; not exactly fun to be around. The makers seem to realize they painted themselves into a corner, and give Joy, and Joy alone, far greater latitude with regard to her emotional range – without explaining why the rules don’t apply to her. It might have made more sense to separate her – say, make her “Intellect”, trying to control and rein in the emotions. I’m surprised no-one apparently realized this during the lengthy process of hammering out the script, which apparently involved multiple re-writes.

The film works much better when you have the emotions all together, working to try and communicate with another person – who has their own versions of the same emotions inside them. Otherwise, it’s a bit of a one-trick pony, filled with dubious cod psychology like “Family Island”, a mental structure so fragile it collapses entirely at the first sign of trouble. And it’s a movie that largely discards that trick half way through, as if aware of its issues, suddenly becoming a heroic quest instead. Comparing this to Docter’s Monsters Inc and Up, it feels far inferior, to the extent it doesn’t seem to come from the same source at all. This instead seems both like an over-complex idea, and one dumbed down for a younger audience – for me, it ended up failing on both ends.