Military doctors Pablo (Ammann) and Diego (de la Torre) are part of a Spanish humanitarian force in Iraq. Not that the large red cross on the roof of their humvee stops them from being the targets of insurgents, and an IED forces the pair on the run. They take shelter in a house, but mistake the residents as a threat and shoot them. Pablo blacks out from his injuries and is somewhat surprised, shall we say, to wake up back in Spain, being feted as a hero for having taken out a terrorist cell. Diego isn’t returning his calls, and government representative Baze (Elejalde) is very keen for Pablo and his wife to sign a deal that will secure the future for them and their daughter. That it contains a confidentiality clause is nothing to worry about, of course… 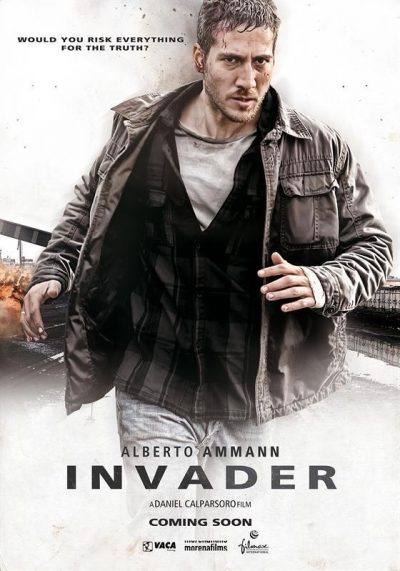 Somewhat conspiracy-themed, yet this generally strays not too far from the realms of plausibility. In particular, it reminded me of the death of former NFL star Pat Tillman, who died in Afghanistan – it was originally reported as a heroic bit of sacrifice, but eventually turned out to be the result of friendly fire. We see the same here, with the reality being twisted for the sake of political expediency – though Diego makes the very reasonable point, that revealing the truth isn’t going to bring anyone back. Indeed, it’s fairly well-balanced in general, with Baze portrayed less as a minion of evil, than a man just doing his job. If there are any true villains here, it’s the American GIs, which does seem a bit of a cop-out.

While I’ve seen more than one comparison of this to the Bourne franchise, that seems rather simplistic. Although Pablo has lost his memory at the beginning, that returns relatively quickly, and it’s also significantly less action-oriented. There’s a single car-chase, and that’s about all you get, with the rest being mostly Pablo trying to stay one step ahead of Baze. Have to say, you don’t get the feeling the government are too bothered here, since there’s only ever about three people on the trail of the hero. Maybe it’s tied to the previously mentioned point, that it’s the United States who are the bad guys: perhaps it should have been the CIA on Pablo’s tail?

It does pose some interesting moral questions, and I liked the ending, which is best described as a no-score draw, with nobody exactly getting what they wanted. However, it’s very much composed of elements we’ve seen before, with nothing notable in the characters or plotting, which would make it stand out or memorable. If there’s not much to criticize here from a technical viewpoint, with solid enough performances, I was still disappointed. I suspect I was hoping for something which might shine a distinctly Spanish light on shenanigans in the Middle East, rather than a workmanlike imitation of a standard Hollywood conspiracy thriller.