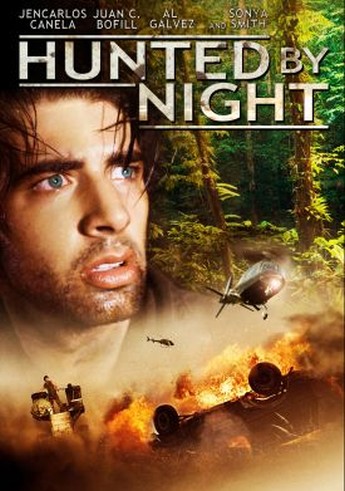 Three friends are out hunting in the Florida Everglades when they come across a drop zone used by smugglers, who have just deposited several million dollars worth of cocaine there. Jose wants to seize the opportunity this presents, before the real owners show up, but Brandon (Canella) wants nothing to do with the stash, and would rather just walk away. Unknown to him, Jose sneaks the packages aboard their truck, and that’s when the fun starts, as Paco (Bofill), the man sent to pick them up, is soon on the trio’s tail, along with the rest of his gang. Outnumbered, outgunned and out in the swamps, they have to try and evade their pursuers and make it back to civilization, where Jose hopes to find an outlet for his ill-gotten gains.

Is it just me, or did significant chunks of this take place in pitch blackness, for no readily apparent reason? I say, “Is it just me?” since I was watching this on a bright Arizona spring afternoon, which probably didn’t help; however, it did seem like I spent way too much time peering into the gloom, trying to figure out if that was a limb or a tree-branch which had just been snapped. Bofill also loves him some slow-motion. This runs almost two hours, and it’s little exaggeration to say that, without this, it’d probably have been 90 minutes long. Yet, there are times when this works, simply because it goes beyond “too much” into an artistic statement which is occasionally awesome: there’s an entire gun-battle which is shot in slow-motion – again, for no readily apparent reason. But it’s that pointlessness which makes it pretty cool.

I keep going back and forth with the rating on this one. Half the dialogue sounds like it was improvised and shot in one take, while some scenes never serve a purpose, such as Jose calling up a prospective buyer, and should have been cut. Yet, Canella has a good screen presence, and Bofill’s background in action and stunts serves the film well, in sequences such as a martial-arts battle during a torrential downpour. Yet again, no-one is even moist in the next scene. Overall, the positives and negatives largely cancel each other out, and the end result passed an afternoon (or a good chunk of it, certainly), without making an enormous impression. For a first directorial effort, it’s not without promise – though a first effort, it clearly is. And don’t go looking for the helicopters on the cover, since they don’t show up at all.