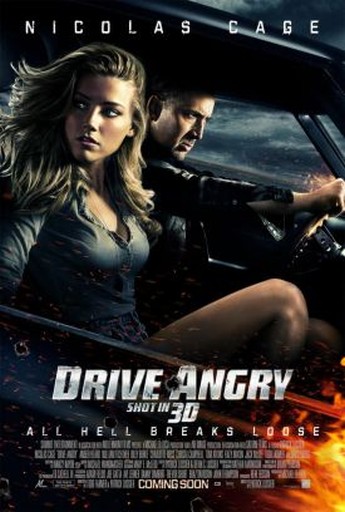 For a $50 million movie, this really feels a lot more than a cheap B-movie. Though I mean that in a relatively positive way, unlike the reviewer who said it was “loud, vicious, tasteless” – but meant it as criticism. John Milton (Cage) escapes from hell, in order to pursue Jonah King (Burke) and his cult, who murdered his daughter and have kidnapped his grandchild, aiming to sacrifice her in order to issue in a new era of darkness. He’s aided by a diner waitress (Heard), but rather more ambiguous is The Accountant (Fichtner), who is also on his trail – does he want Milton to fail, or is The Accountant also on his side? Such subtle questions of motivation are largely secondary, when you get to have copious crunchy violence featuring the almost indestructible Milton, going up against King and his host of minions, the local cops and anyone else who chooses to get in his way, pausing briefly only to bang the occasional skanky barmaid.

Whether or not you enjoy this will probably depend on whether you can appreciate the bat-shit and lurid mentality behind its creation. In the most obvious example, Milton’s aforementioned sexual escapade is interrupted by an assault from a gang of King’s thugs, but he doesn’t even have the common courtesy to pull out while dispatching them. That was the moment onto which I stunbled while surfing cable, and needless to say, resulted in a swift viewing of the entire movie. There isn’t anything else quite up to that standard of insanity. but it has a comic-book mentality that was hugely reminiscent of that other Cage vehicle (hohoho), Ghost Rider. We particularly enjoyed Fichtner, who sinks his teeth into his role and dispatches people with a quarter. Note: not person, people. Despite some ropey-looking CGI which we could have done without, this was solidly entertaining nonsense, and can only be enjoyed as such.