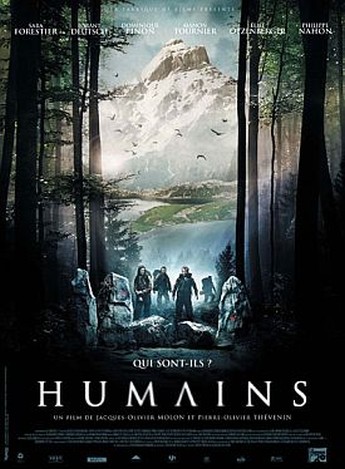 An anthropological expedition heads for the Alps, after their interest is piqued by the discovery of a curious skull, resembling, but different from, a Neanderthal. Their van picks up a vacationing family whose car has broken down by the side of the road. However, before they get much further through the remote mountain countryside, an accident forces them off-route, and down into a ravine. The survivors have to try and make their way through the mountains and gorges, but the unforgiving terrain is not their worst enemy. It soon becomes clear that someone – or something – is watching the expedition from nearby, with bad intentions… Particularly toward the female members of the party… And are the locals, who have some interesting traditions and festivals, complicit with what is happening?

It’s a little difficult to take this one seriously: the Alps are hardly the middle of nowhere, so the concept here, which requires a good deal more seclusion, is largely implausible. The scenery certainly looks very pretty, but as the film unfolds, it’s hardly going to work as a promotional film for the Swiss Tourist Board. The characters aren’t exactly interesting either, so you don’t particular care for them. The movie does finally get into gear for its final third, as the survivors get out of a bad situation, only to find things might not be any better, and they’ve just exchanged one set of perils for another. However, it’s not going to rescue anyone’s interest, which will have taken a chair-lift and headed for pastures civilized quite some time ago. While the French have certainly put out their share of interesting and provocative horror films lately, this one is certainly not among them.