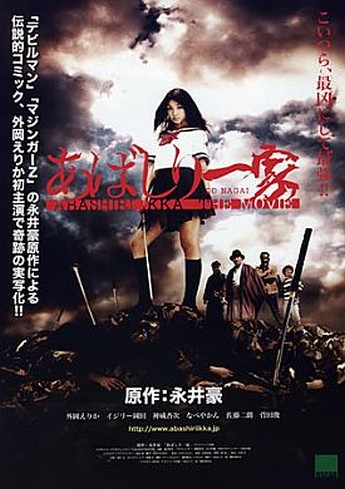 I confess to being utterly unfamiliar with the manga on which this is based, but I’ve seen enough of Go Nagai’s other work, e.g. Cutie Honey, Devilman, Kekko Kamen, to have a handle. Or so I thought. This is just all over the place: it’s as if A Clockwork Orange had inserts directed by Benny Hill. It centres on the titular clan, a ferocious family of gangsters have been terrorizing Japan, but are finally captured, their memories wiped, and they’re sent to live in the Nippon Extra-Territory – think Escape From New York. There, they are the subjects of a mind-control experiment, under the control of the territory’s despotic leader (Soto), who also orders random executions, and is deliberately trying to provoke daughter Kikunosuke (Tonooka) into violence, to test the effectiveness of the mind-control. Inevitably, of course, the Abashiris break free of this, setting the stage for a not-very epic battle.

It could be an interesting social satire, asking whether the incorrigibly violent still have civil rights. However, thrown in with impeccably jarring bad timing to cripple such potential, are globs of comedic face-pulling, particularly from pervert son Goemon, which are such unsubtle slabs of overacting, Sid James would has spurned them. The production value are cheap, and it lacks the OTT excess which makes Nagai’s other works more appealing – this is strictly PG-13 rated. It might also have been endearing as a parody of “gangster family” films, like The Godfather, but doesn’t opt for anything significant in this area either. I suspect, like most comic-book films, it may have more appeal – or, at least, be more comprehensible – to those who do know the source material. While that is probably more my fault than the film’s, that doesn’t excuse the brutal unevenness of content, obvious scripting and generally poor execution, which fail in any significant way to live up to the poster.