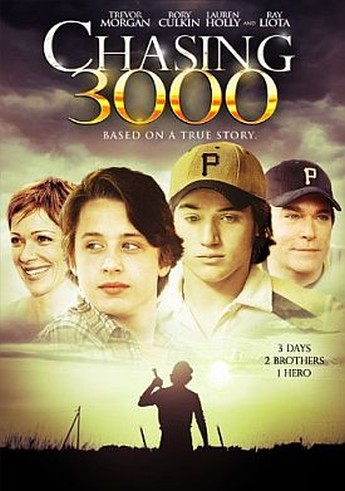 It’s the early seventies, and teenage ball-player Mickey (Morgan) resents having to move from Pittsburgh to California, even if it’s in the hopes of an improvement in brother Roger’s Muscular Dystrophy, which has reduced him to the level of a near-cripple. Mickey worships Pittsburgh Pirates’ superstar, Roberte Clemente, who is nearing the landmark of 3,000 career hits, something done by less than a dozen players in the history of the game. When his Mom (Holly) heads out of town, Mickey seizes the opportunity, driving back across country with the aim of seeing Clemente’s landmark game; Roger (Culkin) isn’t going to be left behind. Needless to say, their mother is startled when she returns to find her sons apparently abducted, and the police eventually track the car down outside a mid-West diner. But a little thing like the absence of transport and no money will hardly stop the brothers, who decide to hop a train in the hope it will take them to Pittsburgh, or at least in the right direction.

While pleasant enough, there is no real sense of drama present here, without any real doubt about the final outcome. Clemente is presented as some kind of mythical saint, the dropping of whose mere name is sufficient to turn biker gangs into a taxi service, and cause strangers to hand over automobiles to the siblings. There’s certainly plenty of grainy footage of the player, who is unquestionably one of the all-time greats. But the reasons for this apparent divinity are never clearly explained, and that weakens the core of the movie. It does successfully evoke an earlier era, before the Internet and cable made it possible to watch all a team’s games, regardless of where you are in the world, and both leads give effective performances, especially Culkin, who avoids the potential pitfalls in a disabled teenager. However, the scenario is the cinematic equivalent of muscular dystrophy, clogging up the works with dubious sentimentality in lieu of significant character development. It leaves proceedings in desperate need of oxygen by the final, cloying reel.