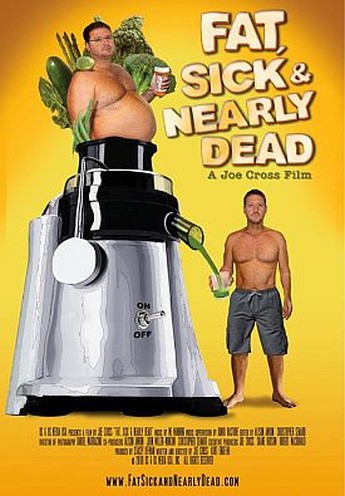 A documentary about an obese Aussie trying to lose weight doesn’t exactly sound like it would be interesting, but Cross – the Antipodean in question – is actually an engaging character, and the film breezes along as a result. He has come to America, to live on a diet of nothing but vegetable juice for sixty days, and to try and promote a somewhat more healthy lifestyle – maybe increase the percentage of fruits and vegetables in the average diet from 5% to 10%. Certainly, Cross needs it: he starts at over 300 lbs in weight, and taking some pills to try and control his auto-immune syndrome, that he basically rattles. It’s not clear if he switched cold-turkey from his unhealthy lifestyle to the juice, or if this was the final step in a progression, but there’s no denying the positive effects, as the weight melts off him, at the rate of more than a pound per day. That’s the first half of the film: but even more startling is the 430-lb driver he meets at a truck-stop, who eventually comes to Joe for help. Over the following eight months, he loses over two hundred pounds, and becomes much more evangelical about the process.

This lacks the polemic approach of a Moore or Spurlock, and is all the better for its laid-back attitude. It is very big on personal responsibility, which I heartily endorse: just about everyone to whom Cross talks admits that it’s their own choice. Of course, the “reboot” espoused is an extreme approach, probably only needed in extreme circumstances, and having smelled the results of Chris’s blendings, it’s not something I will personally be adopting any time soon [the scent is one more commonly-associated with a cow-pasture, shall we say…]. I could probably have done without the cutesy animations that serve no real purpose. But the genuine nature of Cross is the film’s ace card: he’s the perfect host for the journey. Even as a hard-core carnivore, this is still pretty impressive – simply as proof that, no matter how bad things can seem, it is still possible to change your life for the better.