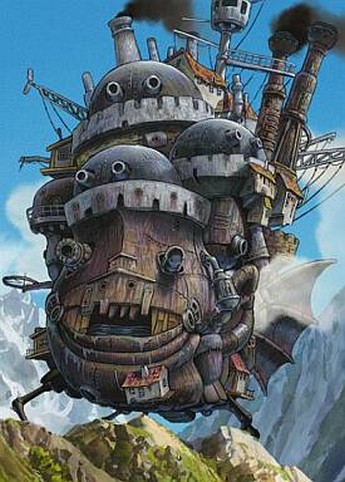 You know what to expect from a Miyazaki film: imagination by the bucketload, great animation, a brave young heroine. And while all are present here, what’s missing is a story-line of matching quality. The curse that affects the heroine, turning her into an aged crone, seems arbitrary yet simultaneously contrived, while a large amount of character actions – even characters – are apparently inexplicable. They just…happen. Example: after the curse, our heroine immediately leaves town, apparently for no better reason than the sorceress involved was called ‘The Witch of the Waste’ – even though the encounter took place in her own shop. And what of her mother, who gets two scenes of no obvious importance – or her sister (one scene!)?

It’s all irritatingly underdetailed, in contrast to the amazing landscapes and machinery. In particular, the titular castle is a beautiful contraption, that forever looks on the edge of falling apart, yet somehow keeps rolling. And Howl, too, is a fabulously tortured hero; as such, who better to voice him than the Dark Knight, Christian Bale? I have to say, the dub is by no means a problem; it’s just that I experienced a growing sense of concern that the translation was flawed in some sense, perhaps dumbed-down for a Western audience? This wouldn’t be the first time this has happened to Miyazaki – see Warriors of the Wind, the hack-job done to Nausicaa – but I thought we’d passed that stage.

Of course, I have no evidence for this at all at the moment; just a knowledge that Miyazaki is capable of better. A subtitled version will likely provide a final decision; until then, this, while still likely the best animated film you’ll see in 2005, has to be regarded as a notch or two below his best work.