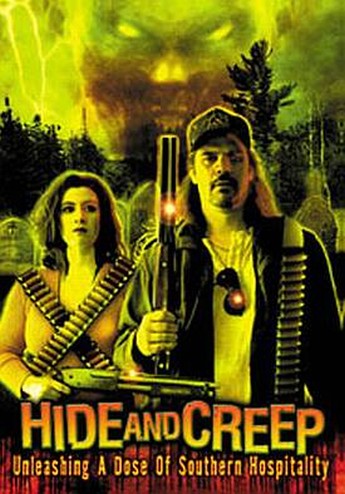 Shaun of the Dead proved the zombie genre was ripe for a spoof; is there room for more? Going by Hide and Creep, the answer is a qualified “yes”, since parts of this work extremely well. The setup is as usual: a small band of heroes have to deal with reanimated corpses of the recently deceased, hungering for human flesh, yadda-yadda-yadda. Video-store clerk Chuck finds his day-job rudely interrupted by the living dead – though I must say, for someone so aware of zombie movies, he proves remarkably slow on the uptake. He and a motley crew of local characters have to survive the day…rather than the night, for these ghouls are actually afraid of the dark.

That kind of twist keeps this ticking along nicely, even if too many ideas never go anywhere – lap-dancing lesbian zombies, or the federal government’s involvement (precisely one guy). Similarly, the multiple threads don’t fit together comfortably, and some scenes are totally cringeworthy, such as a rant about Coke vs. Pepsi that should have been strangled at birth. Still, the Alabama setting offers a new(ish – Redneck Zombies?) spin, and most of the humour does work.

The balance heavily tilts that way; genuine horror is hampered both by one-dimensional characters and disappointing FX, even by low-budget standards. Overall, the result left us appreciating what a beautifully-written piece of work Shaun was, without slack and working across genres. Inevitably, Hide suffers in comparison – though so do 99% of films, most of which have had a lot more money spent on them. And while this is obviously cheap, it shares with Shaun an obvious affection for the topic. If you don’t laugh out loud at least once here, you probably already are a reanimated corpse.