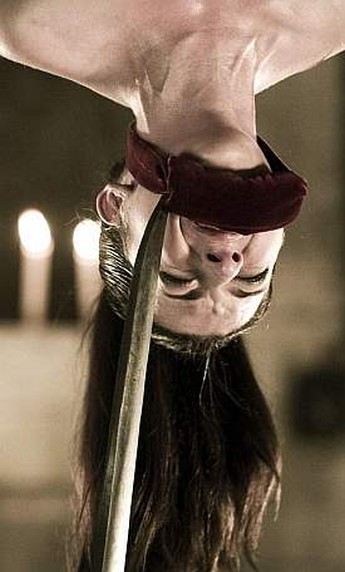 There is one sequence in this sequel which is totally exquisite, being both extremely disturbing and completely hypnotic, to the extent that you don’t want to watch, but you can’t not watch either. It’s the essence of horror, and for about three minutes, this film grasps the concept. It involves two nude women and a scythe: you’ll know when you see it. I was certainly hoping for a lot more, given that British MP Charles Walker described it thus: “From beginning to end it depicts obscene, misogynistic acts of brutality against women — an hour and a half of brutality.” Of course, he hadn’t actually seen the movie, and the reality is, a grand total of one female is tortured on-screen.

The film does center on three women who, more or less, go through the same experience as the young men in the original – lured to Slovakia, in order to provide material for an operation that sells the experence of committing murder, to those who can afford it. That said, it certainly isn’t the “torture porn” people like the MP quoted above would have you believe. Hell, you can’t buy a blurb for your DVD like that. Indeed, it may actually be more restrained, for the most part, in its depictions: maybe since we’ve been there before, the basic concept is deemed already to be clear. The weaknesses are the weaknesses of the first; we don’t care enough about the characters, and can only muster a passing, vague sense of threat. The addition to the mix here is more background on the killers, in particular a pair of Americans, one of whom (Bart) is beginning to have second thoughts about the trip.

Anyone hoping for a journey into the heart of darkness, to investigate why someone would do so, will be disappointed: the explanation turns out to be sadly prosaic. It’s also pretty talky, with the girls yakking far beyond what is necessary – the original, at least went for gratuitous T&A to tide the viewer over until the splatter. There’s the expected presence of cult names to give the fanboys something to feel superior about, and Quentin Tarantino will get to cash a cheque thanks to the usage of some footage from Pulp Fiction. Maybe he should send it to the Slovakian Tourist Board: I sense they need to do some damage control in the wake of this series.