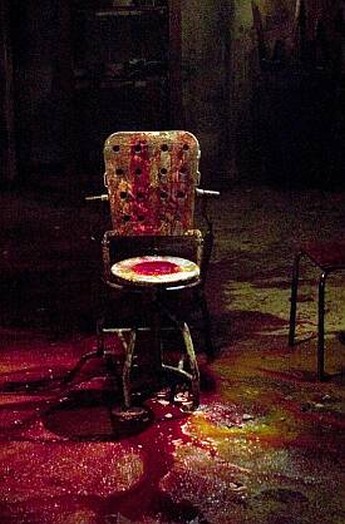 When I backpacked round Europe in the mid-80’s, I heard tales that, for example, gangs of thieves roamed overnight trains, pumping chloroform into carriages so they could rob the travellers therein. This has much the same “urban legend” feel, with a nastier edge: here, the story is of a backpackers’ haven in Slovakia where life is good and the women easy – right up until you find yourself abducted as a plaything for the rich and extremely sadistic, in a nearby disused factory. That’s what happens to Paxton (Hernandez), on a tour of Europe with two friends (Richardson and Gudjonsson), though initially, this plays more like some kind of Eurovision Breast Contest, with more continental bosoms than a Danish dentist’s convention. But as things develop, the tone becomes darker with the inevitability of a solar eclipse.

Interestingly, Paxton at first seems tagged for an early departure as the loudmouthed imbecile: it goes against the rules that all chances of survival end up on his shoulders. The influences are obvious to any fan, but what odds the bastard son of Guinea Pig and Bloodsucking Freaks ending up #1 at the American box-office? That, by itself, deserves credit, though I confess to being somewhat disappointed with the gore, and the speed with which most of the characters vanish: cinematic torture needs an emotional hook as much as a meat-hook, and that’s largely missing here. Of all people, Takashi Miike makes a cameo, playing “himself” as a snuff customer; props for this nod to one of the masters. While Roth may have some way to go before Miike will ask him to cameo, for only his second feature, he already has a better handle on the genre’s core elements than many directors.