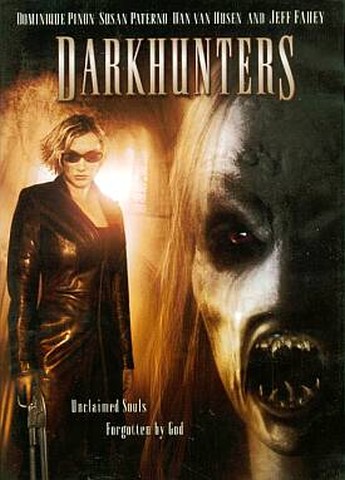 Well, it’s certainly an interesting idea. Something like a British version of Buffy perhaps, in which psychologist Carol Miller (Paterno) discovers more going on beneath everyday life than expected, and becomes a ghost-hunter, dispatching lost souls in order to save them from a worse fate. The problem is, in this feature, she doesn’t do much actual dispatching: after the first two minutes, it’s quite talky, with levels of flashbacks that needlessly confuse, rather than adding much. It leaps back to her origins, when she meets her first ghost, whom nobody else can see, then meets the current Grim Reaper (Van Husen), as well as a creepy individual (Fahey) who claims to be a private eye called “Philip Marlowe” – but probably isn’t.

There are a number of nice sidelights: Miller wears gloves, because she experiences the future death of everyone she touches; a really well-staged “car meets pedestrian” moment merited immediate “FM!RT!” status; the Grim Reaper’s face is covered in digital flames; he also uses cats to find the spirits, as they can spot the ghosts, but he can’t. However, these don’t gel into anything more than an over-extended pilot – at 45 minutes, this would probably work nicely, but as this stretches past the hour mark, it begins to outstay its welcome. Director Roberts seems to think that longer scenes equal more tension. He’s wrong, and more content or tighter editing would have elevated this above the humdrum.