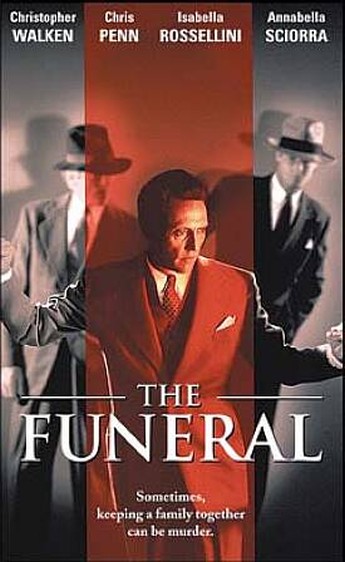 Even when appearing in dreck such as The Country Bears, Kangaroo Jack and Gigli, Walken is among the most watchable of actors – so you can imagine his impact here, where he has some meat to work with. He, Penn and Gallo play gangster brothers Ray, Chez and Johnny: calm, crazy and Communist respectively. It centers on the funeral of the last, gunned-down outside a movie theatre; largely through flashbacks, the past is revealed, as well as the current tensions among the remaining brothers, their wives and associates. I venture to suggest it probably doesn’t count as a spoiler to say things end in bloodshed, since violence (physical, mental, sexual – or a combination thereof) is rarely more than a scene away.

The dynamic tension between guilt and redemption is common in Ferrara’s work; the most obvious cousin is King of New York, but also Bad Lieutenant. Ray is the clearest expression of this; he rejects religion, but says he’s going to hell. Thus leads to some great moments, like his interrogation of rival gangster Gaspare (Benicio Del Toro – you can see why he’d go on to greater things), whom he believes is behind Johnny’s murder. The scene is reminiscent of the one between Walken and Dennis Hopper in True Romance; it’s nice to see Tarantino get ripped off for a change. While the acting is uniformly excellent (Sciorra deserves especial credit in a film heavily-skewed to the macho), the storyline is spotty, and I’m less convinced by the resolution, which seems sudden and forced. Appropriate? Probably. But it still doesn’t have the fitting resonance that the performances demand.