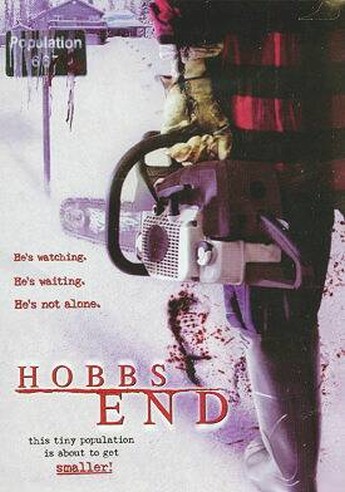 Confess I was intrigued by the title – Hobbs End was the name of the Tube station in Quatermass and the Pit, and also the ‘fictional’ town from In the Mouth of Madness. Any similarity, however, quickly evaporates in the face of 30 minutes of the grindingly worst exposition we have endured in a very long time. Lacey (Conti) is a widow, who literally runs into new handyman Todd (Elliott). Not that he does any work; within an hour of arriving, he’s drinking vodka, having a bath, getting cooked dinner and snogging his employer. Oh, please… Courtesy of clunkily bad radio broadcasts we – but not Lacey – discover a multiple-murderer has escaped nearby. Could it possibly be…? Surely not!

Oh, who are we trying to kid? Even the sleeve gives it away. Of course he is. The film does perk up here, as Todd’s multiple personalities peek out; this guy is an entire party by himself, it’s like watching Gollum on a bad trip. From here, things progress pretty much as you’d expect – though cliched and over-familiar is preferable to more grinding exposition, any day. Run-scream-fall-over-get-caught-escape. Rinse. Repeat as necessary. The DVD lists the running time as 93 minutes, but the actual movie lasts about 105; this, along with the totally unmerited presence of a chainsaw on the cover, should probably count as cruel and unusual punishment. Two characters, one location, no imagination.