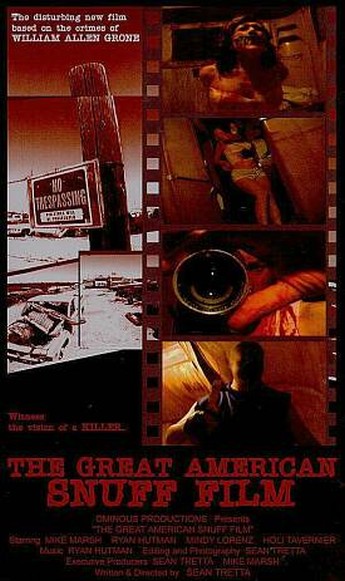 The makers were initially discussing a premiere with one major theatre in Arizona – up until the cinema saw the film, at which point all communication abruptly ended. I kinda see their point; this is the longest 85 minutes we’ve endured in ages. Normally, that’d be condemnation of a high order, but here, the aim is to make something very difficult to watch, and it succeeds admirably. It’s an unflinching record of six days when William Grone (Marsh) and backward accomplice Roy (Hutman), captured two women and tortured them with the intention of making a snuff film, climaxing with the movie itself.

Like Blair Witch, this takes low-budget cinema weaknesses and tries to convert them into strengths: most obviously, we imagine snuff as grainy, with limited camera movement. Much of the information is also told in voice-over by Grone. This is wise; what dialogue there is, doesn’t convince and is largely unnecessary – we don’t really need to know where the murderers got their van, or hear a pair of hookers chatting. But its depiction of the mindset of a psychopath scores a number of solid hits: “I have a nervous condition that prevents me from achieving an erection when I’m with a woman. I’ve found that the problem goes away once they’ve stopped moving.” Sheesh. The hairs on my neck are paying attention.

Enormous credit to Lorenz and Tavernier as the victims, who convey the sheer horror of the experience, in scenes which must have been enormously tough to film (years of therapy beckon…), and certainly are to watch – imagine the “home video” sequence in Henry: Portrait of a Serial Killer, massively extended in length. Restrained on gore, it makes up for this in raw intensity and downright, seemingly-endless nastiness. Rarely can cold-blooded murder have come as such a relief, for both character and viewer; this is impossible to like, but equally impossible not to respect.