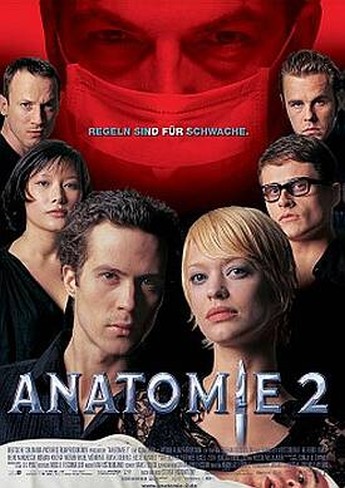 Once again, a young doctor, full of innocent hope, arrives at a medical establishment and finds himself lured in by the anti-Hippocratics, a secret cabal of loopy colleagues who feel regulation of science is, as the poster puts it, “for the weak”. Less a sequel than a remake, yet I found it worked better this time round – more effort is put into establishing the Anti-Hippocratics, and their appeal is seductive. Here, the doctors implant artificial muscles in themselves, which adds moral ambiguity (can society dictate what we do with our own body?), and Germans discussing the creation of a master race is undeniably chilling. There’s also a nice opening, when hero Joachim (Metschurat) discovers the gulf between his idealism and the reality of hospital work.

Was cheered to see no English dub on the DVD; I still wince about the first one’s feeble attempt. However, Metschurat is no replacement for Franka Potente. Her character appears briefly – she’s now an investigating cop – and their scenes together show why Potente is a star, and Metschurat won’t be. This leaves a gulf at the centre of the film, though Knaup (the father in Run Lola Run) does well as the scientist in charge, and it builds to a nice climax, in which Joachim must defeat both mad colleagues and his own drug-addiction. While bringing little that’s new to the concept, it is rather more polished and energetic than the original, so we’ll let the lack of innovation slide. But if there’s ever a third installment, we do expect significant developments.