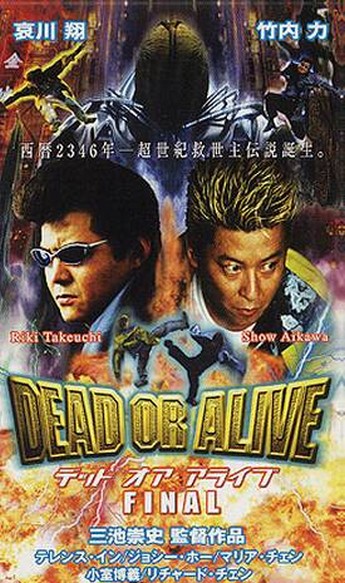 I think if Miike stopped churning out seven, no exaggeration, movies per year, it might be a good thing. His imagination isn’t in doubt; it just gets spread too thinly. Here, again, we have several fabulous moments, interspersed throughout a cheap Blade Runner knockoff. A replicant – they even use that word – cop, who doesn’t realise how synthetic his world is, hunts down rogue android Ryo (close enough to “Roy”), through a cityscape of neon and emotional bleakness. Ridley Scott, much?

In an interesting twist, procreation is strictly controlled, with a birth-control drug mandatory for all inhabitants. But while this is supposedly the year 2346, people still drive cars; indeed, the sole concession to futurism is an occasional billboard-ship in the sky, hardly a new feature. Takeuchi and Aikawa, playing cop and prey, have by now an easy relationship as actors that works well, and the mixed-language dialogue is a nice touch. Miike isn’t a martial-arts expert, so the final battle is shot badly; much more impressive is his use of bullet-time earlier, proving the gimmick still has life in it. However, I actually dozed off for about ten minutes, a third of the way in – though the roast-pork sandwiches were likely partly to blame, the film definitely failed to hold my attention…