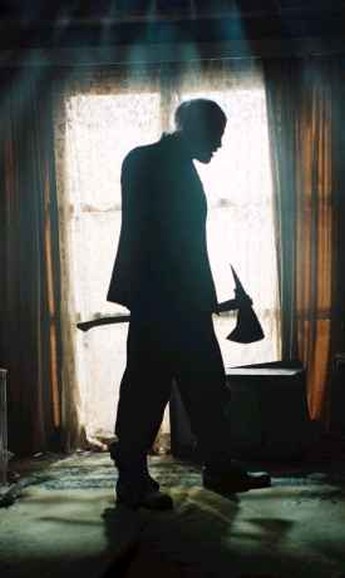 Interesting to watch this after Wolf Creek, which takes basically the same scenario, and fumbles it mercilessly for 100 minutes. Hills, on the other hand, does about all you could hope for – admittedly, given it’s another of those superfluous horror remakes currently beloved by Hollywood. I mean, how exactly do they think they could improve on The Hitcher? Much the same goes here, since it’s not as if Wes Craven’s original brimmed with unfulfilled potential. Aja, who helmed the credible French stalk ‘n’ slasher, Haute Tension, opts to give the cannibalistic rural folk a back-story, blaming fallout for their mutations. Onto their territory fall an extended family of seven, who soon find the car accident was no accident at all, and before long, their next family reunion could be held in a telephone kiosk. Those left have to get in touch with their inner psychopaths, if they want to survive.

Perhaps more should have been made of the moral struggle; the flip from nuclear family to nuclear-testing family, as it were, is too easily accomplished. However, Doug (Stanford) the Jewish Democrat’s transformation into a savage killing machine is entertaining – by the end, he’s stalking the ghost town where the mutants live, a man very clearly on a mission. No issues with the gore either, in a variety of flavours, but mostly involving heads and pointy utensils. To Aja’s credit, he makes a decent effort at giving the family character traits, with realistic bickering that’s almost endearing. That’s probably over-extended though; since any genre fan knows where this is heading, “tension building” scenes of lurking mutants seem pointless padding. While it probably helps it’s been around 20 years since I saw the original – and having Wolf Creek as a touchstone makes any movie seem like an Oscar-winner – this was better than most recent remake attempts.