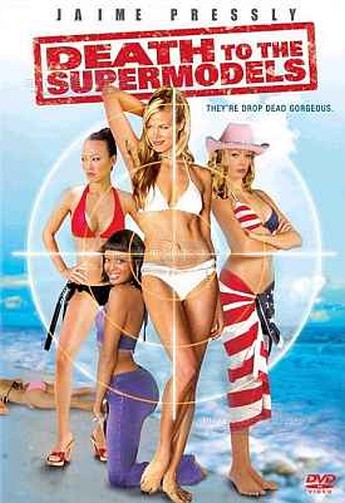 This was stumbled across entirely by accident: we turned on the TV, and there it was. “It”, being the incredibly-hairy armpits of self-proclaimed #1 supermodel Eva (Burns). What the f…? Turns out that a fashion magazine has hired Tiffany (Pressly) to take the top five models to a remote island for a photo shoot. Where, inevitably, they are targeted for death, one by one – and Tiffany is hearing a sarcastic voice in her head, telling her she’s the killer. This is one of those films where you can’t believe some scenes were actually written and committed to celluloid; the death of one victim by excess flatulence comes to mind. Then there’s the two German photographers, one mute (Negron), communicating his wishes for the models through some form of mental telepathy to the other (Winston), who expresses it in ludicrous directions like, “You are a kangaroo without a pouch.”

Okay, it sounds total crap, but somehow manages to be surprisingly entertaining, not least because everyone involved, Winston in particular, delivers the supreme, over-ripe dialogue with enthusiastic glee and appropriately straight faces. The results are undeniably stupid, and this isn’t a film I could in all true conscience recommend – any amusement value likely depends on its very strange sense of humour finding some kind of resonance in the viewer. And it certainly doesn’t all work, not least a finale in which Wee Man from Jackass is involved. But it’s, equally, definitely not what we expected from the title or synopsis: I was thinking crap slasher, rather than surreal farce. On that basis, this has to be classified as a surprise, and we were far more than acceptably entertained.