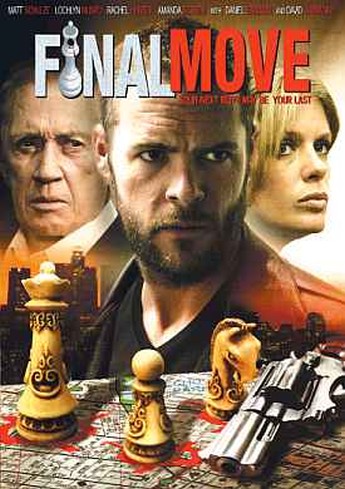 I think this may be the worst-written film I’ve seen in a very long time. For example: hero Dan Marlowe (Schulze) is a cop with psychic abilities. But having already stretched credibility there, are these then of any significance to the film? No. Not at all. The central idea here is a chess-match between a killer and Marlowe on the map of Los Angeles: in whichever square the psycho’s piece lands, there a body will be found. LA’s area = 498.3 mi2 [thank you, US Census Bureau!]; maybe ESP explains how the police turn up at the exact spots necessary to the plot, when all they’ve got to go on, is an eight square-mile area. This sloppy thinking permeates the entire film, and the director’s style (in case you’re wondering; yes, it’s his older brother) is phenomenally awkward. The opening is the worst, with a horrendously-constructed sequence of a killer’s execution that generates annoyance more than any other emotion; should I also point out California never used the electric chair to administer the death penalty?

The acting is probably the least-noxious part of proceedings, well behind the script and direction. We’re not talking anything startling here, admittedly, but Schulze and the rest of the cast are adequate, despite the hero affectedly wearing dark glasses the entire time. Probably the worst offender is Daniel Baldwin, who turns up for a cameo: it may be a nod to his role in the similarly-themed Knight Moves, though his horrendous overacting suggests he lost a bar-bet to Travolta. Despite his presence on the cover, David Carradine has two scenes as a somewhat unkempt police boss – he must have gone “double or quits!” and lost. The film lurches towards its ludicrous conclusion, possessing the smoothness of a shopping cart with a wonky wheel, and the killer’s identity comes as absolutely no surprise at all. If you feel any inclination to watch this, I would definitely double-check, mate.