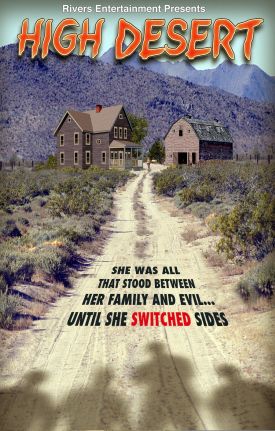 As noted in the introduction, this is a real obscurity, without an entry in the IMDB. Lang does appear, as directing Soul of the Demon, but as for the cast… Jason may have been in a couple of other video cheapies, but there’s nothing at all for Glinski, Roberts or Davidson, making it unlikely this is there under a different name. [2018 update: a page now exists, and it’s not clear if it’s the same Charles Lang or not] Hardly counts as an undiscovered classic though: it’s a simple tale of three campers, one of whom (Davidson) pissed off a biker (Glinski) in her day job at a bar. Said biker – and, to a lesser extent, his gang – are now out for revenge, in the remote woods where our trio have gone for a weekend trip.

Technically, it’s about what you’d expect for a 1994 (approx – the copyright date is almost unreadable on the credits) video movie; occasionally flaky sound, but you get used to that, and it’s the story that’s more problematic. This could go in a number of directions, especially when we learn that two of the bikers – one good, one bad – are Vietnam vets. I was looking forward to Rambo vs. Rambo, maybe, as the two groups faced off against each other. Or even something nicely revenge-based would have been acceptable. Instead, this takes such a long time meandering through the forest, that the final confrontation takes, in its entirety, slightly more than five minutes. It’s not badly-handled, though relies too heavily on bullets which go conveniently astray; a poor payoff, that’s a damp squib more than an explosive climax.