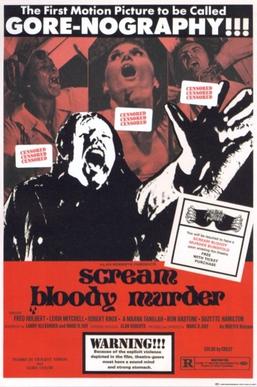 Young Matthew (Holbert) runs his father over with a farm machinery, but ends up losing his hand to the same piece of equipment, and is sent off to grow up in a mental hospital. He comes back to find his mother has just remarried; while you think he’d welcome an alternative father-figure, the new one rapidly gets axed by Matthew, now sporting a hook. His understandably freaked mother (Mitchell) falls over, smashing her brains out on a convenient rock. Matthew hits the road, killing a newly-married couple, before finding a hooker, Vera, who reminds him of his mother – she’s also played by Mitchell. He “befriends” her, but starts killing off her patrons, and to impress Vera also takes over a large house, by the simple means of killing all the inhabitants. When she still asserts her independence, he kidnaps her and ties her up in the house. Can she escape his loony grasp?

While clearly daft as a brush, this is not without charm, and goes about its business with energy, as exemplified by Matthew’s rant at Vera: “I get groceries and clothes and art stuff and kill people. And do you appreciate it? No. N-O.” It’s also interesting how he is simultaneously fascinated and terrified by sex, and this eventually proves his downfall. Keep an eye out for a young Angus Scrimm, pre-Phantasm, as a doctor suspicious of Matthew, who may or may not meet a grisly fate. [Oh, who am I trying to kid?] The print here is not in good condition, and looks to be the cut version seen elsewhere, albeit with a new intro and title badly spliced-on, claiming it to be ‘Splatter Cinema Presents A Horroscope [sic] Production’. That aside, this was entertaining enough, and I didn’t have to rewind it because I dozed off – more than can be said for some films in this pack…