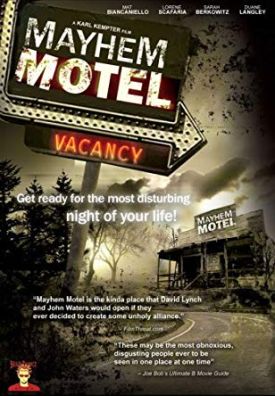 This sits uneasily in the collection, but I guess Pendulum don’t have one called Wacked-out Weirdos, because that’s what this really demands. It’s centered on a motel, and the…unusual, shall we say, inhabitants, over the course of one night. Most of them seem to be seeking sex of one kind or another – and it’s rarely the straightforward vanilla kind. There’s a businessman who is getting his genitals shaved by a (very poor) Marilyn Monroe lookalike, who refuses to sing him Happy Birthday; a pimp who uses a megaphone to speak into his cellphone. Oh, and the film starts off with a guy climbing into a bathtub and vomiting. For real.

The most obvious influence is the early work of John Waters, but Kempter manages to omit anything that would actually cause viewers to give a damn about these characters. There is little or no structure, sense of progression or even storyline to act as a thread from which interest can be sustained, and the individual scenes are mostly dull as ditchwater. I think my patience finally evaporated during the discussion between a pair of guys, explaining things like a donkey punch or Dirty Sanchez. The only people who might confuse this with cutting-edge cinema are teenage boys, though some credit is due Kempter for shooting this on 16mm rather than video. The print seems to have more than its share of audio-dropouts too; however, by the end, you’ll probably find yourself looking forward to these, as preferable to the dialogue.