I think I took my bags and checked out of the Cenobite Hotel after the fifth entry; it was hard to see how it could get any worse. Critical opinion regarding the subsequent sequels confirmed the wisdom of the decision – not that titles like Hellraiser: Deader were exactly calling to me. When I stumbled across the latest entry on Netflix while browsing in a low-key way on New Year’s Eve, my first reaction was, “They’re still making these?” It has been seven years since the last installment, after all. Still, in the absence of much else to do, we watched it, as our final movie of 2018. And, to my surprise… It didn’t suck – especially considering we’re now more than thirty years from the original, and this is number #10. 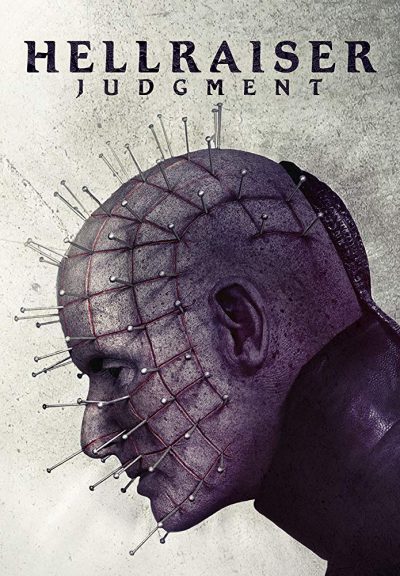 For by the time you reach double-digits in any franchise, makers find themselves in a difficult situation. If you keep going down the same path, you risk being criticized for churning out the same old stuff. But if you change things up, you risk alienating the existing fanbase: after all, if a film has been popular enough to merit nine further entries, it must have something going for it. Though I’m not sure how much that’s true for Hellraiser. It appears these sequels are a way for the current rights owner to keep hold of the property until the long-delayed remake, first announced in 2006, can escape development hell. [I guess Bob Weinstein must have opened a Lament Configuration]

Tunnicliffe has mostly gone the re-invention route, in part no doubt spurred by Doug Bradley turning down the role of Pinhead again. Apparently, this was in response to being asked to sign a non-disclosure agreement about the script, which seems weird on both sides. While Pinhead still has a supporting role (played by another actor_, the main denizen of hell on view here is the Auditor, played by Tunnicliffe himself. It’s a nice concept: the demon as world-weary bureaucrat, shuffling people around to be judged and punished, with the aid of an organic typewriter. For the first time in the series, there’s also an angel, Jophiel. She has an uneasy relationship with Pinhead and his allies, and isn’t exactly angelic, saying things like, “We discovered long ago that in order to control the evil, we had to be the ones implementing it.”

Less interesting or successful is the plot on the human side, which concerns three cops (Carney, Wayne and Harris) tracking down a serial killer in Oklahoma City, who is killing people in line with the Ten Commandments. It’s like Se7en never happened, folks! None of the characters here make any impression, and when the key twist is revealed, it provoked little more than a marginal stirring on our couch. Though let’s face it, this series has increasingly been less interested in the victims than the inhabitants of the netherworld. Maybe that’s where the series needs to go, as it seeks to catch up with Friday the 13th in volume. Abandon Earth entirely, and go full-on into the war between heaven and hell. I’d be down for that. Getting Bradley back would help, too.