I waa initially intrigued by this, since Kanefsky directed a couple of very solid horror movies, in The Hazing and Nightmare Man. I was understandably curious to see what he could do in the radically different genre of the nudie-fairy-story-musical. I’m hard-pushed to think of any other examples, at least since the seventies. I’ve seen attempts to mix two of the three, e.g. nudie musicals, but all three is a novel combination of late. Unfortunately, it’s one which proves a stretch too far, with Kanefsky’s talent for horror not apparently transferring to these other fields. 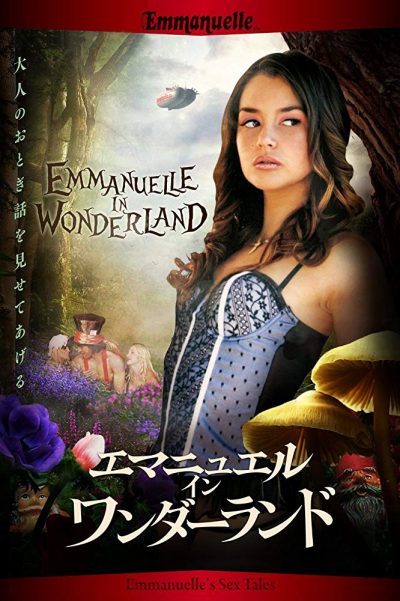 On the plus side, if you ever wanted to see Ron Jeremy rapping, dressed as a wizard, this is the movie for you. [I will understand if that is not exactly on your bucket list though] And this is actually a legit Emmanuelle film, made with the blessing of franchise owner Alain Siritzky, who had frequently employed Kanefsky previously. He directed all seven entries in the Emmanuelle Through Time series, and this is a “director’s cut” of one part. Indeed, it was the last movie Siritzky produced, to be released before his death in October 2014. Though let’s be honest: the character had been so diluted through over-exposure from the 80+ sequels churned out, it was barely distinguishable from the (no less numerous) knock-offs, spelled with varying numbers of m’s, n’s and l’s.

Emmanuelle (Haze) is the test subject in a scientific experiment who falls through a wormhole and ends up in fairy-tale land. This is inhabited by virtually every public-domain literary character you can think of, from the works of Mother Goose through the Brothers Grimm, Lewis Carroll and Frank L. Baum. Except, y’know… Sexy variations thereof. For instance, the Mad Hatter’s Tea Party, the first group Emmanuelle meets, degenerates into a bit of an orgy, thanks to his “special” tea. Albeit only after a sing-song, this being a musical in case you had forgotten. The ruler of this land is an Evil Queen (Albright) with a talking mirror, who sees our newly-arrived heroine as the latest threat to her #1 position, and ends up having Emmanuelle put in jail for indecent exposure.

The problem is mostly a script which seems to think simply dumping well-known characters into erotic situations is enough. It isn’t, as is apparent from the few successful moments where they go further, such as the queen bickering with her mirror about it being free-standing – so, technically, not on the wall, or a discussion about the word “yonder”. Much more of this sort of invention is needed for the film to work, especially when the songs are horribly weak, and the performances fall well short of Rocky Horror. With all respect to Haze, Susan Sarandon she is not, and the film desperately needs someone willing to go full-on Tim Curry. Though Albright makes a decent effort, and I drew amusement from the frog voiced by someone doing a Kermit impersonation, it’s an undeniable issue when your most memorable performance comes from Ron Jeremy…

Dressed as a wizard.