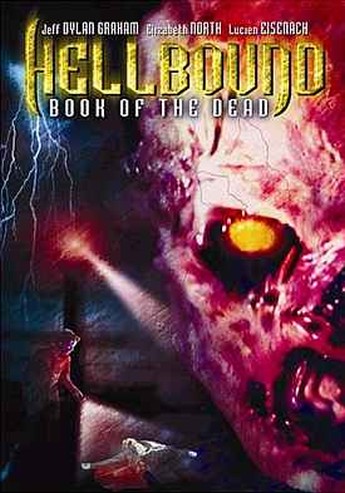 Not to be confused with Hellbound: Hellraiser II, the film here has more in common with classic horror short story, The Monkey’s Paw, dealing with the dangers of bringing a loved one back from the dead. Diane (North) needs a certain magical volume to resurrect her dead sister; when she and other half Lane (Graham) find it, they end up killing the current owner (Eisenbach). The upside is, it provides someone on whom to test the spell. However, it doesn’t appear to work, so Lane chops up the body, embeds it in concrete, and dumps most of it at sea. Now the really bad news; the magic actually worked, and the bits that didn’t get sunk want revenge. Meanwhile, Diane has decided not to bring back her sister, who was killed by – I kid you not – a flying hubcap to the skull, and revive her father instead. Let’s just say, the words “unqualified success” do not apply there.

Nor do they apply to the film as a whole, which takes a good idea and drains most of the interest from it. The main culprits are too many unnecessary scenes, or ones which badly mangle their purpose – such as a bit of bondage next door, interrupted by a phone-call, which then suddenly turns into Exposition Central. There are many others which serve no particular purpose, except to get the movie to the necessary length; indeed, it’d have been an improvement had this and The Somnambulists (above) traded running-times. While I must say, the crawling hand FX are very impressive, there’s a reason why The Monkey’s Paw came in at less than ten pages long. Sessions needed to develop the idea further here, in order to make it capable of sustaining a feature.