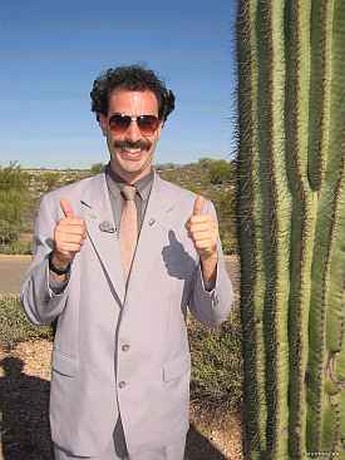 Taking the rest of the title as read, this is a surprisingly kind work, if still possessing huge potential to offend. Kazakhstan reporter Borat (Baron Cohen) and his producer (Davitian) head to New York to find out about America. But a chance encounter with Baywatch generates a road-trip in an ice-cream van, seeking Pamela Anderson. On the way, they meet driving instructors, Jewish B&B owners, inner-city youth, plus more, and all encounter Borat’s outlandish behaviour. Yet oddly, the aspect of US culture that comes through is tolerance for those different from ourselves, with most people – New Yorkers excepted – showing an extraordinary amount of patience. The general opinion seems summed up by the woman at a dinner party, who says he thinks Borat is lovely and would quickly adapt to America. Of course, that’s before he comes back from the bathroom with a sack of excrement, asking how he should dispose of it.

Similarly, Borat ♥ America, despite – or because of? – his racism, sexism, homophobia and anti-Semitism. He thinks homosexuals should be killed, but hangs out at a Gay Pride rally, making new friends. He’s ignorant, not malicious, and while people he meets often echo his views, one suspects it’s out of politeness as much as any deep-held beliefs of their own. Which may be the point; political correctness has made it rude to call BS on anyone’s opinion (outside of attack-dog talk-radio, and that skews too far the other way). It certainly poses more questions than it answers. What I really want is a DVD commentary track from Baron Cohen – not Borat – explaining, among other things, his purpose here. Was it simply to create a funny movie? Or to poke fun – and if so, at what? And how much was “real”? For example, when Borat meets Anderson, circumstances make it seem nigh-impossible she was not in on the joke. But if so, her reactions seem totally genuine, unless she is a phenomenally good actress. 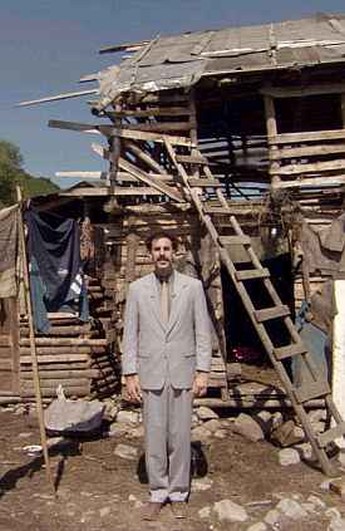 All that aside, is it funny? Hell, yes. Even as you cringe in your seat, for a thousand different reasons, you’ll be laughing your ass off. Borat is comic genius, an innocent abroad, a stranger in a strange land, used expertly by Baron Cohen to create satire of Swiftian levels: getting a rodeo audience to applaud Bush’s “war of terror”, for example. You couldn’t make this stuff up, but Borat goes through it with the most impeccably deadpan approach you’ll ever see. While the Ali G character was at his best interfacing with celebrities and skewering intellectual liberals, Borat crosses over to shed light on the “real world”. And that’s a large part of what makes it relentlessly funny: what might provoke a titter on-set becomes near-hysterical in a genuine location, surrounded by unwitting bystanders. This is Jackass‘s infinitely-smarter brother, that pulls off the rare feat of being genuinely intelligent and extremely amusing at the same time.