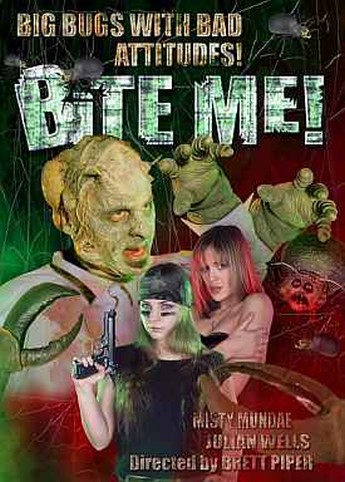 Having seen Piper’s Arachnia, I was looking forward to this tale of a strip-club infested with weed-crazed, blood-sucking ticks. How can you go wrong with that concept? Well… Firstly, until the end, it seems the stop-motion, which made Piper’s previous work stand out, has taken a huge step back. Here, it’s particularly unconvincing when it has to interact with the sets or characters – too often, the bugs look like they’re floating above the floor or their victims. Secondly, there is little to love about the characters, not least owner Ralph (Thomas), an annoying jerk. I think he may be supposed to be, and its his attempt to raise funds that brings the insect-ridden dope to the club; still, add a hysterical DEA agent (John Fedele), and dumb exterminator Buzz (Monkiewicz), and you’ve got too many scenes that leave you with a headache, wanting to reach into the TV and slap someone.

It’s only Mundae’s stripper, Crystal, that comes off as genuinely likeable, and there are occasional moments of deadpan wit, such as when she and Buzz trade urban legends with straight-faced panache. It’s also amusing how getting bug-bitten drops the victims’ inhibitions – presumably due to their marijuana diet. When the insects finally come out in full force, things improve significantly, but it takes almost an hour for the film to acquire an adequate head of steam. Much of the preceding chunk is taken up with dialogue that is nowhere near as funny as the makers seem to think. While there’s no shortage of nudity, despite the setting, it’s mostly very un-erotic, and you can certainly see why the club is in danger of closing. Some of the shortcomings are forgivable, and a result of the budget, yet the script is also woefully weak and that’s what damages this more than anything.