This certainly doesn’t reach the titular level claimed. It probably doesn’t even merit “Heck of a night” status, likely topping out slightly below “Goshdarnit of a night.” The main problem is a story which seems unwilling to pick a direction and stick with it. This is probably another example of the problems caused when your director is also your scriptwriter. The former tends to nods his head and accept whatever ludicrous contrivances the latter comes up with, because they’re the same person. Here, this starts with two teenage girls playing with a ouija board [I trust the makers obtained the necessary copyright clearances here, “ouija” being a Hasbro trademark], when they unleash the spirit of a guy called Raymond. Bad stuff happens. Fast forward two years, and… 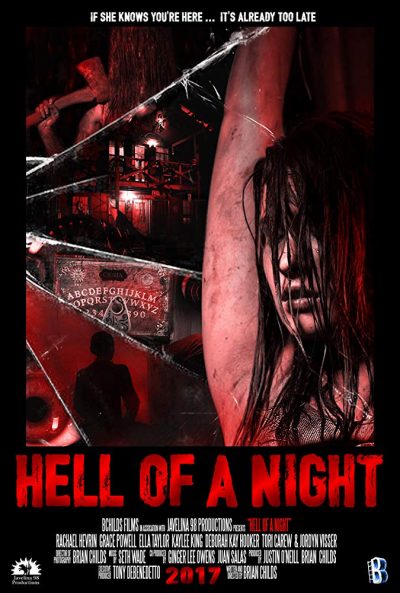 Well, that’s basically where the film falls apart. For the next chunk features a selection of Barbies with interchangeable heads, names like Blake (Hevrin), Shaine (Powell) and Chloe (Taylor), and questionable attitudes. For some reason, Blake (or maybe it’s Shaine. Or Chloe. My notes are vague on this point) opts to go and stay in the ouija™ house. There is then a lot of wandering around, the inevitable finding of old stuff in the attic, and spooky goings-on like a swing which suddenly starts moving by itself. Be still my shrieking heart. Then Shaine (or maybe it’s Blake. Or Chloe) turns up, intent on robbing Blake of the money which we, the poor audience members, never realized she was carrying around. Then the guy to whom Shaine owes money shows up. And one of the teenage ouija™ players shows up, begging our heroine to burn the board.

Almost none of this makes logical sense, and even less of it is of any interest, especially once you realize none of the actresses are going to get nekkid. This is disappointing, since they clearly weren’t employed for their acting talent. Though in their defense, it feels as if much of the dialogue was looped in post, which doesn’t help anyone’s performance. The main positive is on the visual side, where Childs (yes, he was also the cinematographer, editor and producer) does make it look good. Admittedly, this is mostly done in a way which suggests he got a clearance offer at Colour Filters R Us, but given the absence of plot or engaging characters, I’ll take style over absence of style, any day. This does mean we get the ludicrous site of someone exploring a house by the light of a rescue flare (shown, top), purely so we are able to enjoy the lovely red glow.

These brief moments can only go so far, and they come well short of anything like rescuing this. Even if you are able to keep straight who’s who among the Blakes, Shaines and Chloes, not forgetting the other generic characters, you will be extremely hard-pushed to sustain interest in the convoluted and muddled goings-on as they unfold here.