I’ve always been suspicious of the “post-horror” movement. It feels like a sub-genre of horror films, for people who don’t like horror films. To me, there’s nothing innately superior about movies which rely purely on atmosphere. The greatest horror films combine this with the ability to deliver a matching pay-off. Take The Thing, for example, which follows up impeccable tension building, with JESUS CHRIST WHAT THE FUCK IS THAT DOG TURNING INTO. What little I’ve seen of post-horror seems to have been too much sizzle, and not enough steak. I fell asleep during The Babadook. When you fall asleep in a horror film, they’re doing it wrong. 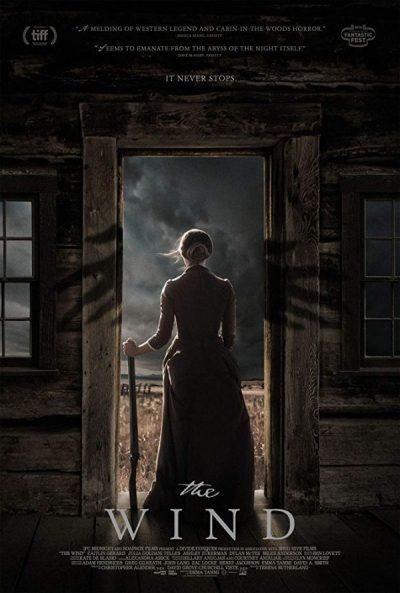 This is set in the 19th century, somewhere out on the fringes of the wild frontier, where Lizzy (Gerard) and her husband Isaac (Zukerman) live in near-total isolation. Even Isaac isn’t around much, since it takes him three weeks to go to the nearest shop for a pint of milk. Their isolation is shaken up by the arrival of a new couple nearby, Emma (Telles) and Gideon (Dylan McTee). At first, it seems that they are weaker than Lizzy and Isaac, but it gradually becomes clear that Lizzy’s grasp on reality is tenuous. You’d think the new neighbours might help Lizzy avoid going stir-crazy, but she’s not the most social of creatures, saying “In cities, strangers stay strangers.” Instead, the lengthy absences of her husband and Emma’s leanings towards religion-powered hysteria, exacerbate her mental implosion.

I did not fall asleep during The Wind. So, there’s that. But nor did it succeed in holding my attention. You’re basically watching someone go insane for an hour and a half, and that’s not my idea of entertainment. Not helping matters is an insanely jumbled timeline, which bounces back and forth without logic. For instance, Lizzy sees a goat, which she previously saw dead and with a huge, gaping wound in its side (above), now whole again. It’s not initially clear whether that was simply the film messing up the order of things (as it does a lot), and so Tammi has to insert a clumsy flashback to the deceased version, purely so the audience can figure it out.

There’s no denying the atmosphere of looming menace which plays out here, foreshadowed ominously in lines like “This land is funny, you know? It plays tricks on your mind,” or “This place is wrong. We’re not meant to be here.” This is backed up by effective sound design. And some scenes do work, such as the visit by an itinerant preacher, whom Lizzy becomes convinced is not what he seems. Mind you, since it appears Lizzie is also apparently convinced the goat, her hairbrush and the bag of oats in the cupboard are not what they seem… And there’s the problem: endless repetition, in lieu of any sense of escalation, especially after the opening scenes spoiler the eventual destination. At least now I know why they call it “post-horror”. Because it’s about as scary as a post.