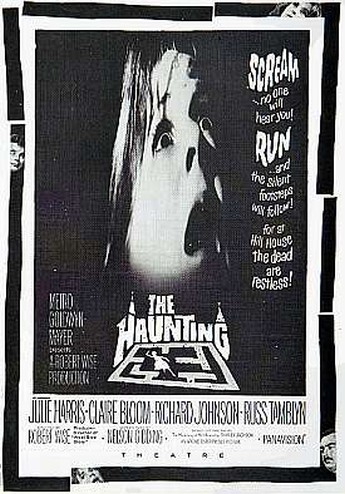 I’m not a big fan of horror movies that rely on suggestion. To me, it’s a cop-out, selling sizzle instead of the steak: true horror is all about being forced to confront things, not just have them lurking in the shadows. The one exception is the haunted house film, because this is something which is largely driven by things that go bump in the night, and what they trigger psychologically in the subject: there need be no masked killer or alien monster at all. That’s part of why this doesn’t just kick the ass of the remake, but then also follows up with a kerb-stomp on the back of its head. That replaces much of the sense of creepiness with big stars and special effects: while impressive enough in their own way, there’s nothing quite like the scene here where the two women are cowering in their room, listening to the banging and other noises that are roaming the house. Neither they nor the viewer have any idea what can be causing them – the assertions of psychic researcher Dr. Markway (Johnson) that ghosts have never physically-harmed the living seem very difficult to believe in the face of the terror being displayed.

Harkway bring three people to Hill House: neurotic shut-in Eleanor (Harris) was the center of poltergeist activity as a youngster; subtly-predatory lesbian Theo (Bloom) is telepathic; and Luke (Tamblyn) is next in line to inherit the house, which has seen a series of tragic accidents, suicides and other deaths since it was built ninety years ago. Almost immediately on arrival, Eleanor starts to feel a strong connection, both to the house and Markway: though quite how much is just a result of her own neuroses is a good deal less uncertain. The main issue here is an overabundance of clunky voice-over, mostly by Eleanor, and too often saying things which should be apparent both through the performance and the direction. Otherwise, Wise does a brilliant job with creating an atmosphere that made me more than a little glad I was watching it at 11am, and not by myself either. For a horror movie with no blood and a body-count that barely registers above the flat-line, it’s undeniably impressive.