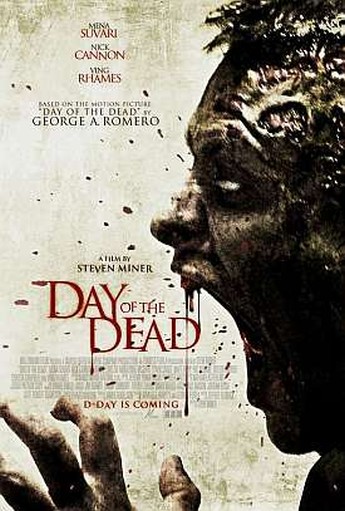 This didn’t exactly start off well. After ten minutes, I turned to Chris and said, “Because what was really missing from Romero’s version was more teenagers,” for this was looking like another one of those Michael Bay horror remakes: replace anything of worth in the original with representatives of the target audience. Fortunately, Miner doesn’t go entirely down this route. While certainly not a patch on the original, and probably not even up to the Dawn remake, this does have an energy of its own, with the characters being kept acceptably busy running and fighting off the infected to spend too much time being irritating. It centers on brother and sister Trevor (Welch) and Sarah (Suvari): the latter is part of the army tasked with enforcing quarantine on a Colorado town where a lethal plague has broken out. We soon find out that the victims turn into ravenous cannibals, and the small (and getting smaller by the scene) band of survivors head for a disused bunker Trevor knows about on the edge of town, to hole up until help arrives. Might or might not be a wise move. Might or might not be disused.

There isn’t much to connect this to the original, basically a) a bunker, b) scientists vs. soldiers and c) a zombie called Bud/Bub. Otherwise, it largely discards any social context and almost all the cynicism, in favor of straight-up undead mayhem. You’re also back at the start of things, rather than in a world no longer owned by the living. It still manages to mis-fire: zombies that at one point can run along the ceiling? Now, I don’t mind fast undead as opposed to slow ones, but acting like Hollywood stuntmen and defying gravity is quite another thing. Similarly, there’s the dubious concept that if you’re a vegetarian, you won’t want to eat people as a zombie. As a carnivore, I find this stereotyping highly offensive. Miner is on much more solid ground when flinging the digital gore about and there’s some good sequences here, most notably when the central group are stuck in a hospital storage room. However, those who were fans of Romero’s piece won’t be impressed – and those who weren’t will find not much here new or of interest, except perhaps the sight of Suvari trying to be a bad-ass soldier. Quite what the casting director was thinking there, escapes me.