This deserves a certain regard, simply for being  the first credited film adaptation of a story by H.P. Lovecraft. Though you wouldn’t know it on first glance. Originally, it was to be called The Haunted Village, but producer/director Corman wanted to tie it into his successful cycle of Edgar Allan Poe adaptations. Poe had written a poem called The Haunted Palace, but at less than 250 words long, there was hardly enough there for a feature. Still, there was enough for Roger to slap a few lines from the poem around the narrative, while the studio changed the title and stuck Poe’s name above it on the poster. AIP gonna AIP: what can you say?

Despite the rather vague credit, “Based on a poem by Edgar Allan Poe and a story by H.P. Lovecraft,” this is largely an adaptation of Lovecraft’s 1927 story, The Case of Charles Dexter Ward. It was subsequently made into a relatively faithful movie, The Resurrected, by the writer of Alien Dan O’Bannon in 1991, but there are some significant changes for this version. In the story, which includes the first appearance of classic entity Yog-Sothoth, Ward is attempting to resurrect physically his occult-dabbling ancestor, Joseph Curwen. Here, Ward is gradually invaded by the spirit of Curwen (both played by Price), who wants to resume his work with the Elder Gods. He also seeks to revive his dead wife, Hester, which does seem like something Poe might have had a protagonist do in one of his stories. 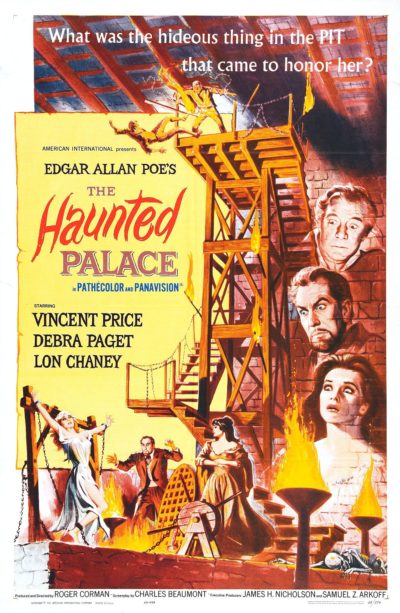 This begins with a prologue, set in the 18th century. Curwen is preparing to sacrifice a local girl to the “thing” he keeps in a pit within his spectacularly large residence, perched on a cliff overlooking the town of Arkham. Seriously, it’s huge. The walk from the front door to the sacrificial altar is so long, they could have called for an Uber. Curwen’s ritual is interrupted by the arrival of a mob of villagers armed with torches – is it sad that, when I type “mob”, my phone now lets me autocomplete the rest of that sentence? They rescue the intended victim and burn Curwen alive. However, they politely wait for him first to deliver a curse on the town, as well as those responsible for his death and their descendants.

After a couple of lines from the Poe poem, we fast forward a hundred and ten years to the late 19th century. Curwen’s descendant Charles Dexter Ward shows up in Arkham with his wife Anne (Paget), having inherited the residence from his ancestor. The townsfolk are none too pleased by Ward’s arrival, not least because he is the spitting image of the sorcerer they barbecued over a century earlier. Despite initial concerns, the new arrival is not dissuaded by their opposition, the concerns of Anne, or by the packs of mutants that shamble around the streets of the perpetually fog-shrouded town. This is mostly because, on exploring the (remarkably well-preserved) edifice, they find a portrait of Curwen, which begins to work its mysterious influence on his descendant.

It is certainly an odd thing, which looks a bit like a Picasso, a hundred years before its time. I guess the Elder Gods are art fans. Anyway, the impact is that Ward begins to be possessed by the spirit of Curwen. At first intermittently, these periods become more frequent, and the cruel and callous nature of Curwen begins to upset Mrs. Ward. Other acolytes also take over their respective descendants – fortunately for the cult, it appears nobody bothered to move out of Arkham over the previous hundred years, dreary and mutant-ridden as it is. The local school district must be really good. Naturally, history repeats itself, with the favoured solution to problems like this: yep, another mob of villagers armed with torches.

During the time Corman was working on his Poe Cycle for AIP (1960-64), Hammer were putting out their own horror films on the other side of the Atlantic, as we’ve previously documented. I was struck by the similarities this has, and it feels like there was significant cross-pollination going on. Amongst other points. they tend to share similar 19th-century settings, towns living in mortal fear of a large building overshadowing it and containing a dark secret, plus frequent wandering through corridors in gothic nighties. The look of this was also impressive, perhaps due to the presence of Academy Award-winning cinematographer Floyd Crosby, whose post-Oscar career took him from High Noon to Attack of the Crab Monsters. 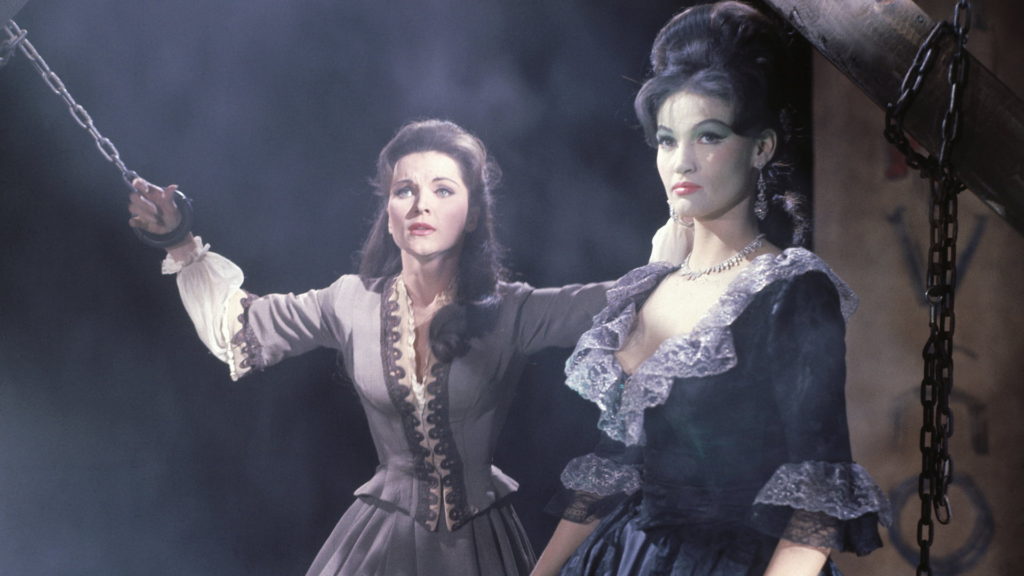 I was rather less impressed with the Lovecraftian elements. These feel dumped in the background, save for a conversation the couple have with local doctor Marinus Willet (Maxwell), about the only resident not terrified of their abode. Oh, there’s talk of occult classic book, the Necronomicon, owned by Curwen, and used to summon Cthulhu and Yog-Sothoth. That’s it. For I’m presuming those Elder Gods are not what’s kept in the pit below the castle? Because that would seem… rude. Indeed, the whole sacrificial things is largely sidelined for much of the film, until Curwen, after getting a bit rapey with Anne, decides she can become the creature’s next victim. It’s very subtly implied this is some kind of sex thing.

Price is particularly good value here, since we get to see him play two characters for the price of one. Another similarity with Hammer is that, like Peter Cushing, Price was equally effective playing sympathetic characters and villains. Here is a good demonstration of both, and I have a sneaking regard for the ice-cold Curwen, who cares not one whit for humanity, except for the way it can be leveraged to serve his goals. Quite what his end-game here is, I’m not sure, but it’s unlikely to be world peace. I suspect those (rather underwhelming) mutants roaming the streets are potentially failures along that path.

This may be just a little too subtle for its own good. While the original author has always been about the dread, there’s nothing much here that would even trigger a saving throw for loss of sanity points, let alone turn you into a gibbering imbecile. Though by no means terrible, in contrast to some other Lovecraft adaptations, it does feel like fairly weak H.P. Sauce…