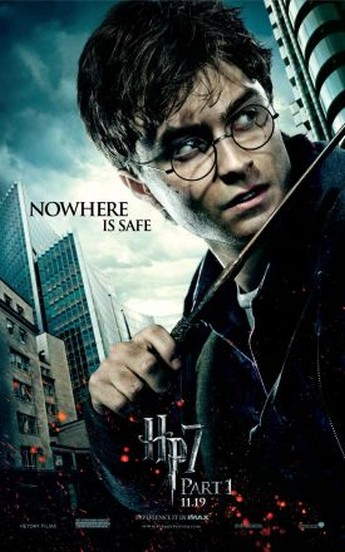 After I read the sixth film had a budget of $250 million, I was surprised to read that the final two combined for a smaller cost. But after seeing part one, this makes more sense, because what you have here is largely Harry, Hermione and Ron sitting around a forest for two and a half hours. It’s actually not as bad as that makes it sound: the reason is that Voldemort’s disciples make their bit for power, taking over the Ministry of Magic and beginning a reign of terror more than slightly reminiscent of Nazi Germany. Our heroic trio are driven on the run, as they try to track down the Horcruxes which hold Voldemort’s soul, and figure out the significant of objects bequeathed to each of them by Dumbledore. Oh, yeah. And they find out what the “Deathly Hallows” are: a wand, a cloak and a stone, which would more or less give their owner the ability to defeat even Death himself.

It’s certainly very different from the previous entries, with Hogwarts barely mentioned at all. To be honest, that comes as something of a refreshing change, though I still get the distinct sense that there’s only half a movie here, and that it was split in two, purely for mercenary purposes. There’s absolutely no sense of closure to be found: the whole thing climaxes at what’s little more than an extended commercial break – fortunately, we have Part 2 queued up, so just need to find a three-hour gap for that. The best sequence is the back story to the Hallows, told in animated form with no shortage of style. Beyond that, there’s a fair amount of stuff which is almost inexplicable to those who haven’t read the book, which would include myself: I only realized one character had died when I read the Wikipedia synopsis! Other chunks appears to have been nicked from Lord of the Rings, e.g. the locket which corrupts its wearer, and if Dobbie isn’t a low-rent Gollum knock-off with heroic tendencies, I don’t know what he is. While things are now clearly in place for an unstoppable finale, I can’t rate this as being any better than an appetizer.