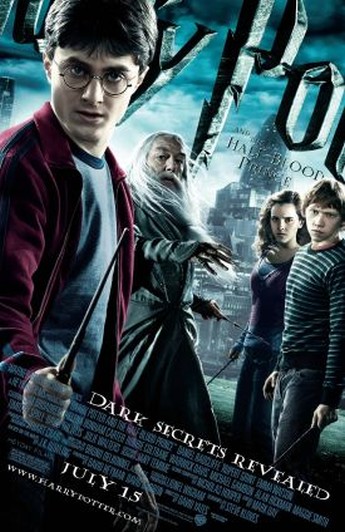 Storm clouds are gathering around Harry and Hogwarts, and this is significantly different from the previous films in a number of ways. It’s certainly the darkest of the series so far, both in tone and content [a lot of the time, I was peering into the darkness to figure out what was going on – though I suspect a contributing factor was not realizing my TV had reset itself from cinema mode due to a power outage…], and what’s also worth noting is, it’s much more our hero vs. the world, with less help from Ron and Hermione. The focus here, is on trying to figure out a puzzle from the early life of Tom Riddle, who’d go on to become Voldemort. To do that, Dumbledore (Gambon) asks Harry to get into the confidence of Prof. Slughorn (Broadbent), who was once close to Riddle, but has suppressed a memory of the pupil asking him about some particularly black magic. Harry has also found a book which previously belonged to the “Half-blood Prince”, and the knowledge it contains is having a disturbing effect on his personality.

Man, more than five years since I watched part five? Maybe that’s why this film does seem to suffer from its length: at 153 minutes, it’s not the longest in the series (all eight are cinematic doorstops, at 130 minutes or more), but to me, it felt like it was. There isn’t very much sense of progression, in that when we reach the end, I didn’t feel like we were nearer a resolution, in any significant way. Despite an obviously shocking moment toward the end, it feels more like the participants are largely marking time, in a holding pattern and hanging around as they wait for something more interesting to happen. There are just about enough momemts of interest to tide things over, and the look of the film is probably close to the best it has been, definitely capturing the sense of foreboding doom which is increasingly present, and borders on the overwhelming. However, this makes the light-hearted moments, e.g. Ron’s keeping goal in Quidditch, feel inconsistent and out of place. Can we get on with fighting Voldemort now, please?