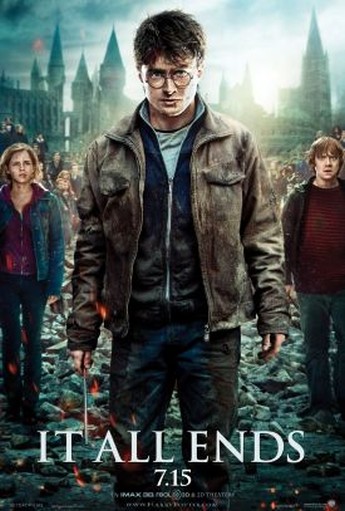 Ah, here we go. It took a long time to get there – and, frankly, none of the intervening five movies were exactly what I’d call indispensable – but we finally have a worthy and rousing finale to the saga, which does just about everything one could want. Harry and his allies face-off against Voldemort (Fiennes) and his forces of darkness, in the biggest fantasy battle since The Return of the King, though first, have to destroy the remaining Horcruxes (Horcrii?), which contain fragments of Voldemort’s soul, in order to render him mortal and vulnerable. However, there are also a number of unexpected surprises, not the least of which is one that will require a supreme sacrifice from Harry, if Voldemort is to be defeated.

If previous entries in the series were long on plot and required too much knowledge of the books in order to be fully appreciated, that’s much less the case here, in what is a relatively straightforward tale, pitting good against evil. And it’s all the better for it, with Yates delivering a film’s that fairly gallops along. While still over two hours long, unlike some of the earlier entries, you won’t find yourself checking your watch during the slower parts – largely because, there aren’t many. It hids the ground running, with Potter and pals breaking into Bellatrix Lestrange’s bank vault, and then escalates steadily up, climaxing with a hellacious battle in and around Hogwarts which leaves the place looking like Dresden, mid-1945.

There are still some unanswered questions, such as why Harry finds one of the Deathly Hallows, only to dump it after a single use; there’s also a resurrection that isn’t well-explained, at least in the movie, and other deaths appear glossed over. Still, these are things that are easy to forgive, as we see our hero complete his journey and transformation from the innocent and shy geek we met in the first film, a decade earlier. All the loose ends are tied up (except for the issue of Dumbledore’s sexuality, which oddly, isn’t mentioned…) in a satisfying manner, and we’re left assured that everyone does indeed live happily ever after. I’ll miss the parade of great British characters actors with whom we’ve got to spend time: it’ll probably be a long while until we see something like this again.