Horror remakes, by and large, suck. The vast majority of them are nothing but cheap cash-ins: the common approach seems to be to tone them down to PG-13 level, stuff them full of actors from television soap-operas, and send them to the theatres without previewing them for critics, in the hope of making your money back over the first weekend [because you know the box-office is going to tank thereafter]. The vast majority manage to forget what it was that made the originals successful, and fail to bring anything new to the party – as a result, the product which ensues, generally fails, both on its own terms and in comparison to the original.

Remaking Halloween seemed to teeter on blasphemy. Almost universally regarded as one of the best horror films of all time, its simple tale of escaped lunatic Michael Myers, returning ‘home’ to continue his killing spree on Halloween night, is among the most influential of all genre movies. However, I was intrigued, in that the person charged with helming the remake was Rob Zombie – someone who actually does possess more of a horror pedigree than the usual suspects in such cases [hello, Gus Van Sant!]. While I haven’t been an enormous fan of Zombie’s work to date, there’s no denying his love for the genre. But could that be translated successfully into a remake of such a classic? Would the benefit of telling the story in a modern setting be enough to offset the familiarity of the material? We sat down and watched the two, back-to-back. Here’s the results. 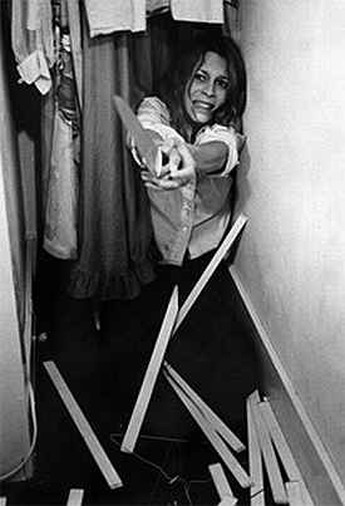 Thirty years have now passed since Carpenter’s seminal slasher pic. How has it stood up to the test of time? The answer is, surprisingly well, though certain aspects have become so familiar, to the point of cliché. For example, the maniac who suddenly comes back to life, when you think they’ve been killed, is now such a part of horror-movie culture, it causes rolling of eyes. One can only speculate what kind of an impact it had, three decades previously, to an audience not used to such things. There are a couple of things which have lasted particularly well: the soundtrack, which adds an enormous level of menace, to things as simple as heroine Laurie Strode (Curtis) going to school, and the performances, especially from Curtis, in her feature debut, and Pleasence, as psychiatrist Dr. Loomis – though both have had long, successful careers, it’s this film which remains their most recognizable, and for good reason.

It’s been a very long time since I’d seen this in its entirety, probably twenty years or more, and so much of it had slipped my memory, especially in the middle. I was surprised at how long it takes to get going – after the opening, it’s probably an hour before there is another on-screen death, a languid pacing which could have a modern audience shifting in their seats with boredom. I can’t say it bothered me too much, however: I found things to keep me amused, such as the frequent footage on TV of The Thing – which, of course, Carpenter would go on to remake himself, to great success, a few years later. Of course, it’s made easier by the knowledge that things will eventually kick into gear. When they do, it’s still prime-quality suspense and terror, enhanced [and this is where so many remakes, and indeed horror movies in general, go wrong] by the fact that you do care about the character in peril. While chunks are now too familiar, through frequent repetition, its place in the horror Hall of Fame is fully justified. 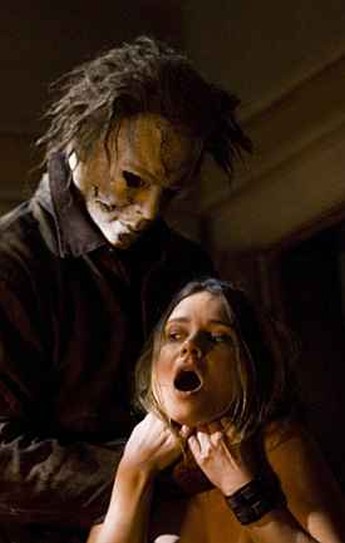 The key difference is that much more focus here is put on Michael Myers. We get his backstory, including his hellishly dysfunctional family, and Myers’ fondness for torturing animals. After he has killed his mother, father and elder sister [rather than just the last-named], there are scenes in the asylum as Loomis (McDowell) tries to pry open his mind, and the suicide of his mother after he kills a nurse. This all combines to round out his character; the original started with his first murder, and little or no explanation for why he is “purely and simply evil”. Here, he is almost sympathetically-portrayed, and that is something of a double-edged sword. While it does give Zombie the chance to develop the remake into its most interesting areas, they make it harder to agree when Laurie says, “It was the boogeyman,” since Myers is depicted more as a textbook psychopath than a semi-supernatural entity.

Credit to Zombie for keeping a lot of the original dialogue and, I’m pleased to say, the music, which works every bit as well here as in the original. I was also impressed by the beautifully self-referential choice of a Michael Myers mask as the one of choice by… Michael Myers [though I was hoping he’d pick up and try on a hockey-mask, before throwing it away in disgust]. However, for all his attributes, McDowell is no Pleasence, and Taylor-Compton definitely no Curtis: as a result, the extended stalk-and-slash into which the film heads is significantly less effective – as in Zombie’s previous films, he goes on longer than needed for best effect. I’m curious about the appearance of Udo Kier in what only amounts to a brief cameo, and imagine there were additional scenes featuring him that ended up cut out, perhaps for reasons of pacing, and that aspect is generally better here. All told, it’s definitely a cut above the average horror remake, and would stand well enough on its own. Watched immediately after the original, however, it would take a brave man to claim it was as good. I am not that man.