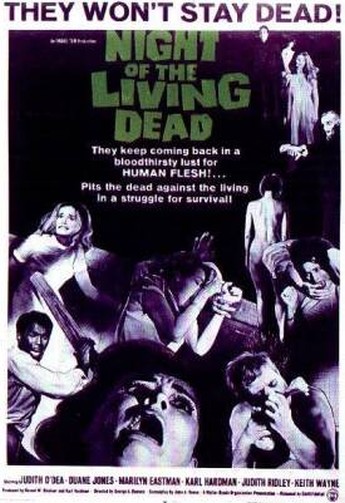 The story of its creation is well known; a group of industrial film-makers out of Pittsburgh, with little feature experience, took $114,000 and created a movie that made more than 100 times its cost at the box-office, and is arguably the single most influential genre piece in the past fifty years. It’s largely reponsible for separating the zombie from its voodoo roots, while its pessimistic and graphic approach has now become an indispensable part of the horror canon.

The script, by Romero and John Russo, doesn’t hang around. Barely are we introduced to Barbara (O’Dea) before she’s chased by a zombie, taken refuge in a house, and met Ben (Jones). He bickers with Harry (Hardman), another fugitive who wants to hide in the cellar, make a futile attempt to head for sanctuary, and watch TV bulletins on the escalating catastrophe. It’s simple but effective, even now, though much of its success is due to happenstance. Romero used b&w for cost reasons, and casting a Black lead was apparently not a conscious choice, despite the racial undertones it generates.

This forward-looking approach to skin colour is in contrast to the 60’s chauvinism on view; the female characters do little but hang on their men’s coat-tails and whimper. The film does sometimes grind to a halt e.g. Barbara’s detailed recounting of events we saw in their entirety, not 20 minutes previously, illustrating Romero’s lack of experience handling drama. The gore – extreme for its day – is now almost the least-effective element, and little will shock a modern audience. On the other hand, the inclusion of media reports helps immeasurably, and remains a textbook example of how to do it right. Almost four decades on, the subject may have been done to death, yet there’s no denying the film’s place in cinematic history.