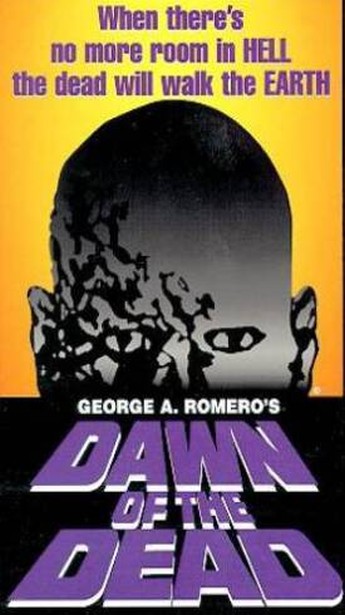 We presume this follows on almost immediately after Night, though things have clearly got worse, with society on the edge of anarchy. Four people, including a pregnant woman (Ross) and two SWAT team members, escape by helicopter; they land on suburban mall and take refuge there, sealing it against the zombies outside and clearing out those inside. However, the biggest danger might not be the undead…

Let’s be honest: even in the shortest of the three version (the 116 minute European version), this is overlong. It doesn’t so much make its point – Look! The zombies are in the mall! We’re just like them! – as belabour it endlessly, with all the subtlety of a mugging. In case we don’t grasp the concept, Romero drives it home again and again: the living dead on escalators, falling into fountains, on ice, or just shuffling around. Their threat is defused to such an extent he has to pluck a deus ex machina out of nowhere, in the shape of a biker gang, to give any impetus to the third act. This is probably inevitable, when you employ Dario Argento, the king of great-looking nonsense, as a script consultant.

Fortunately, there is still a lot worthy of praise, just as long as Romero sticks to his core idea: reanimated corpses that want to eat you. Most notable are an immensely unsettling opening in a TV station, providing a microcosm of society’s collapse, and the film then takes us on a SWAT team raid where things go from bad to worse. It’s segments like these, and Tom Savini’s marvellous FX work (it still stands up almost twenty years later), which stick in your mind, long after the heavy-handed attempts at social satire are forgotten.