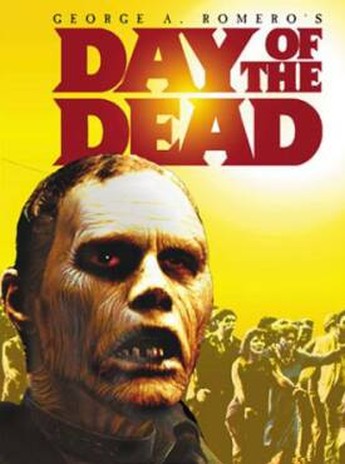 Despite characters that border on the painfully stereotypical – oh look, an alcoholic Irishman – this is easily my favourite of the trilogy. About half way through Dawn, Romero decided zombies were no longer the threat, and this film runs with the idea beautifully; until the end, they merely seal the pressure-cooker, wherein humanity’s last remnants (for all they know, anyway) tear each other apart. Sarah (Cardille) is trying to find a way to ‘cure’ zombies, apart from a bullet to the head – exactly the approach favoured by Capt. Rhodes (Pilato) and his men, tasked with keeping the scientists safe. They now want to bail, with only the wits of project head Dr. Logan (Liberty) keeping things even barely in check.

Military and science face off; the rest of us are on an express elevator to hell. The tone is much more even than Dawn, and also mercifully skips clumsy jabs at society, preferring instead a compelling bleakness. It put off a lot of viewers at the time, but now seems ahead of its time. Even Logan, who initially seems the most grounded, eventually turns out to be no less disconnected from reality than the obviously insane Rhodes. It’s almost like Romero is suggesting the human race’s time is up, and we might as well step aside, since we have nothing left to offer the planet. Add Savini’s again spectacular FX, and you have an under-rated classic, that doesn’t justify the accusations of slow pacing sometimes levelled at it. Indeed, the biggest problem I had with the film, was watching it directly after Shaun (for the second time) – that was like seeing Excalibur immediately after Holy Grail, but is hardly Romero’s fault.