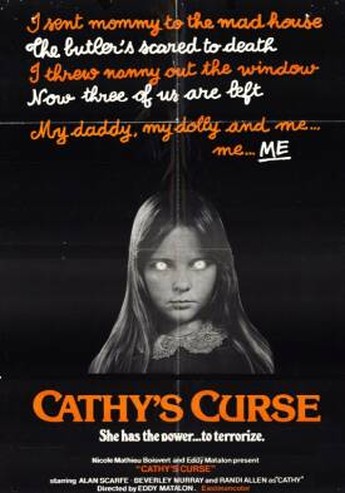 The film starts in 1949, with a little girl being taken away by her father, who badmouths his wife who has apparently gone off with their son. Their car crashes, and bursts into flames. Three decades later the son, now with a daughter, Cathy, of his own, moves into the house; his wife is recovering from a nervous breakdown. But Cathy finds a doll with its eyes sewn shut in the attic, and before you know it (especially if you doze off, like I did…) spooky things start happening: nannies fly from windows, creepy-crawlies start creeping and crawling, food rots in seconds. Everything short of the house screaming “Get out!”, in fact.

It does have a certain hypnotic and surreal quality, and I’m grudgingly impressed by the way the writers don’t even bother to offer any explanation, let alone a convincing one. However, they seem to believe that cobbling together ideas lifted from good movies is the way to make one of your own, and will overcome deficiencies in areas like acting, special effects, etc. The results are unsurprisingly bad, though Allen, playing Cathy, is decent enough to make it a mild surprise when I found out she never appeared in anything else. Despite a couple of semi-memorable moments, this will likely tax your consciousness more than your nerves.