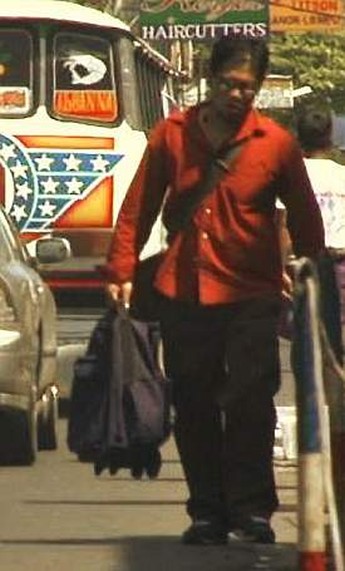 Got to love the premise here: Adam (Gamazon) returns to the Phillippines, but instead of being met at the airport by his mother, he finds a cellphone has been inserted into his luggage, along with photos of her, bound and gagged. A call on the phone tells Adam he must do exactly as he is told, or she and his sister will be killed: the voice then leads him around the seedier areas of the city – this is not exactly a tourist-promotion movie – on various missions. From here, you could easily spiral off a tense, taut thriller, as fish-out-of-water Adam struggles to come to terms with an impossible situation. The makers…not so much. There is an awful lot of walking. Not even the brisk kind, in which you might engage, were members of your family kidnapped by a terrorist cell. “Dawdling,” might be closer to it. If I were a radical terrorist, I would be keen to get everything done as quickly as possible, but the antagonist here is apparently in no hurry, quizzing Adam about his life in America, girlfriend, reluctance to speak the local language, and Muslim faith, as he takes him on an anti-tourist tour of the country he abandoned.

That’s really the problem: viewers will spend too much time on the back of their seats, rather than the edge. The pieces of the puzzle, such as the role played by Adam’s father, are dropped in appropriately, but one feels a disturbing sensation, the makers want to be too even-handed and explore the characters and their motives, forgetting that what works on liberal talk-radio is much less effective on the cinema screen. Yet the unseen voice on the phone is just as omnipotent as the lurking powers in any Michael Bay production, which makes me wonder why his group bother going to all this trouble – just blow up things themselves. As a micro-budget piece of work, filmed guerilla-style on location, entirely and solely by the two creators, it’s very laudable. However, it’s the kind of thing that Hollywood actually does better; certainly, an ending that resolves so painfully little would probably not have made it past the first studio draft.