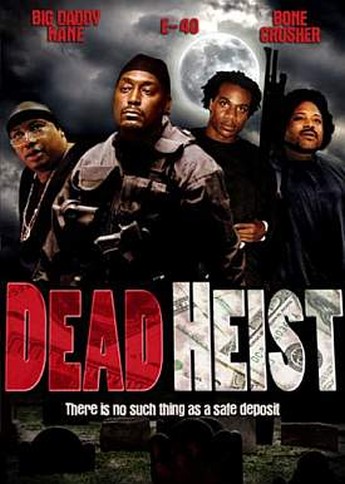 Apparently a product of the Genre Blendomatic 3000, this answers the perpetual question, why aren’t the more blaxploitation films about bank robberies, that include zombies? I’m sorry: did I say ‘perpetual’? I meant, of course, ‘never before posed’. Jackson (Naylor) agrees to that old staple, ‘one last job’ for his crime-boss (the surprisingly good E-40 – keepin’ it real, as I believe the kids today would say), shepherding a gang of street-punks through a bank robbery. However, things inevitably go awry and a siege situation develops between the perps and the local cops: a siege unexpectedly lifted by the arrival of an undead swarm, who turn the police into lunch. This may or may not be much help for those inside the bank of course, who (eventually) includee a deputy (Mims) and an ex-military zombie-hunter (Kane – in the late seventies, it’d have been Fred Williamson), who has been tracking these thing, the product of an experiment gone awry, as they move along the Florida coast.

The clear blueprint is From Dusk to Dawn, also a crime pic that takes a right-turn in the middle into supernatural mayhem in an enclosed space. If Heist doesn’t quite have the same gleeful energy, impressive splatter or Salma Hayek, it isn’t so bad at what it does, especially once it gets out of the ghetto and the almost incomprehensible dialogue that results. Naylor has something of Vin Diesel to him, and gets decent support from the rest of the cast; however, it definitely needs to amp up the gore a notch and the effects in generally are nothing special to write home about, likely a side-effect of a budget that undeniably is low. While you could poke holes in the plot with a discarded spork – the near-complete lack of attention the authorities pay events is, I suspect, another result of cash considerations – it doesn’t hamper proceedings significantly. If you watch only one zom-blax-heist picture this year…I guess it probably will have to be this one.