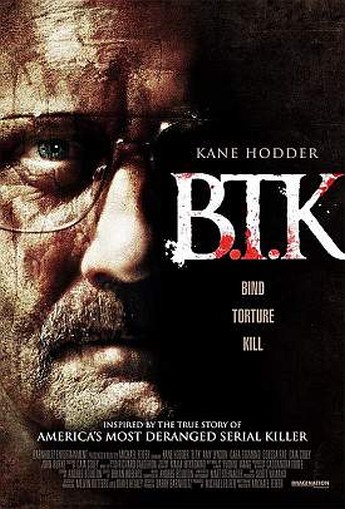 Yep: it’s Jason from Friday the 13th [Well, parts 7-10, anyway…], without the hockey mask – and looking more like a suburban dad, in this tale loosely based on the real ‘BTK Killer’, who operated in Wichita over a period of almost two decades. I say, “loosely,” as there are certainly some liberties taken with the facts – the real killer was caught 14 years after his last murder. But the basic character of Dennis Rader is retained. President of the local church and a Scout leader, who worked as a compliance officer, patrolling the local neighbourhood looking for infractions of city by-laws. But when not enforcing petty regulations, and while his wife has no idea of her Rader’s other life, he breaks into people’s houses and lives up to his self-proposed nickname – BTK standing for “Bind Torture Kill”. Well, it’s better than the some of the other suggestions he offered in letters to the authorities and press, most of which were a bit crap e.g. ‘The Asphixiater’ [sic].

Anyone looking for insight into the criminal psyche will find scant pickings here, but otherwise, it’s not too bad. Hodder in particular, is very good, putting over just the right mix of creepiness and barely -suppressed rage, capable of exploding at a moment’s notice when given the opportunity. His wife and daughters on the other hand… much less convincing, most obviously just after Rader has been arrested, a scene that comes close to de-railing the entire movie. The killings have a realistically-nasty feel to them, drawn out affairs, that occasionally veer a bit too close to sadoporn. If never much more than shallow exploitation of a very unpleasant individual, it remains more of a hit than a miss. I can’t help wonder what else Hodder might have done, had he not been stuck behind a hockey-mask for so long.