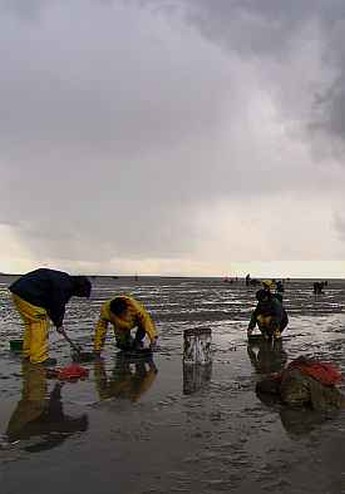 Broomfield is known more as a documentarian [and many of his works number among my all-time favourites in the genre]; this has the feel of a documentary, but is actually a drama, telling the story of an illegal Chinese immigrant, Ai Qin. She comes to the UK in search of a better life, so she can support her son in China; however, all she finds is a place on the edge of society, transient labor and exploitation by those into whose debt she fell as a result of her six-month journey to the UK. After the house in which she and a dozen other immigrants are packed is raided, the remnants head North, having heard of work in Lancashire, gathering cockles in Morecambe Bay. The locals are none too impressed by their arrival, forcing the immigrants to work at night – when the incoming tide can easily creep up on the unaware. Which might seem a spoiler, except this film was inspired by a disaster in 2004, where 23 Chinese workers were drowned in one night.

It’s not Broomfield’s first stab at a dramatic feature, though he would rather we all forgot 1998’s Diamond Skulls. This works better, with a naturalistic tone that’s helped by the actors being former illegal immigrants themselves, able to draw on their own life-experiences. It is, however, depressing stuff, with a relentlessly downbeat tone that becomes overbearing: yes, we get that the life of an illegal immigrant is crap. Can we now move on? And that’s aside from the question of personal responsibility – no-one is forced into illegal immigration. This is ignored, in favour of a portrayal of Ai Qin as purely a victim, not someone whose mere presence, it could be argued, shows how little she respects the laws of the country she’s in. That said, the film does a good job of exposing an aspect of British society we probably would rather ignore, even if I suspect Broomfield might have been better off making an actual documentary, rather than a fiction designed to look like one.