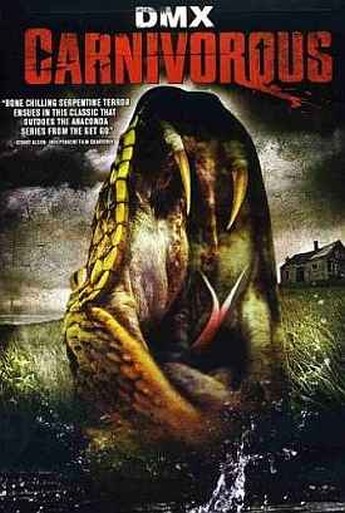 While on a weekend getaway, an SUV of college kids run over and kill the wife of Alan Cade (Herthurn), in revenge he conjures up a gigantic snakigator thing, which follows them to the remote house where they are partying and begins to chomp through them. Stricken by a burst of conscience – which would be been more helpful before the snakigator, me thinks – he enlists the help of Nick (DMX), the son of the voodoo man from whom Alan stole the ability to summon snakigators [look, I just think the word “snakigator” is very cool, and it’s not as if I’m going to get to use it in many other reviews. So you can expect to see it crop up a few more times: get used to it] Nick, being black, has a bazooka. And this is no gratuitous bazooka – it is a bazooka necessary to the plot, for it will be used in the final face-off against the snakigator.

One has to wonder if appearing in this was some kind of judge-ordered community service for DMX, the result of his recent legal troubles. All told, he’d probably have been much better off going to jail and getting pounded in the ass by Bubba and his mates, for this is weak and feeble. Fain and Brown, as two of the college kids, make absolutely no impression at all, and indeed, the entire group are a collection of stereotypes: the Slut, the Jock, the Sensitive Guy, etc. and the sole surprise is not who survives, but that the Slut manages to have sex while keeping both her bra and panties on. The mechanics of that are far more interesting than anything else in the movie. I could have coped with all that, had there been gory deaths or a cool monster, but the film fails to deliver in both these areas too, with the snakigator such a CGI construct, I expected to see Super Mario bounce off its back. Don’t be surprised to see this one on the SciFi Channel some Saturday afternoon soon, and that’s the natural habitat for it.