When you’re in jail, you have a lot of time to think and read. This is what Antonio Frau (Acaso) did, while serving time for strangling his girlfriend in the heat of anger. Unfortunately, the reading he did was Nietzsche and a book on French serial-killer Landru, and as a result, he has decided to cleanse the streets around the former whorehouse he inherited from an aunt. To this end, he redecorates Room 6 with a table and straps, power tools, plus plastic sheeting on the walls, and lures in local hookers, whom he rapes, tortures and dismembers. His wife knows nothing about this, since she works nights at a local hospital, and is also having an affair with a doctor there. Meanwhile, the same cop who put Frau away last time, is slowly closing in, but our killer/hero seems strangely unconcerned… 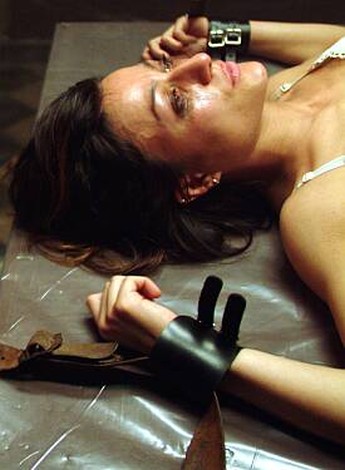 There’s no arguing, this is slow-paced, with a lot of voice-over from Frau explaining his mental state, a fairly clunky device for conveying thought processes. [Compare, for example, Henry, which managed to do a much better job through dialogue and imagery: Barón lacks the flair that McNaughton brought to the “mind of a serial killer” genre.] There are also some plot questions; how does he keep his victims quiet during the day, when his wife is home? And at the end, there’s references to him killing eighteen people, which comes as a shock: even counting his girlfriend as one, only four die on-screen, with most of the rest not even mentioned in the body of the film. It’s a sudden jump in scale that provides an unwanted distraction, during quite a clever finale.

But if the numbers don’t add up, the intensity of the actual killings do, right from the first shot, which depicts his first murder and goes on for what seems like months. And that’s mild, compared to the sadism he inflicts once he gets going. It’s more psychological than physical; the dismemberments are gory enough, yet feel like something from Hollywood Chainsaw Hookers more than anything. It’s the lead-up to these that is difficult to watch, and pack most of the film’s wallop. On the whole, however, it is perhaps over-cerebral a work to be truly effective; it seems to me that murder is too brutal and nasty to be couched in such (pseudo?) intellectual terms. The film is most powerful when at its most raw, and that isn’t quite often enough.