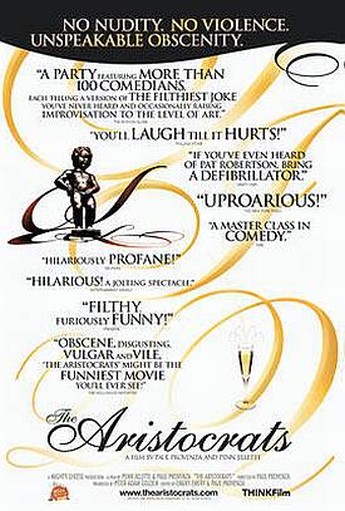 It probably would have helped if I’d heard less about this in advance. Going in, I knew it was about the titular joke, largely told by comics to other comics, the core of which is a description of the most vile, depraved and sickening theatrical act you can imagine – basically, whatever obscenities the comedian wants to relate. It’s an interesting concept, as a key into the psyche of comics perhaps, or an investigation of the extreme edges of humour. Unfortunately, the film doesn’t bother with much analysis beyond the very shallow, prefering mostly to show lots of different varieties of the joke. This is entirely upfront about being a one-joke movie, and the problem is, it isn’t actually a very funny joke. The first time you hear it, it might provoke appalled amusement – but subsequent returns diminish sharply, and even the shock value of the descriptions wears thin eventually.

The fragmented nature doesn’t help much. There are a lot of five second clips, before the film-makers get bored and cut to someone else – an approach guaranteed to destroy flow and continuity. The best moments are when someone takes the joke and bends it in an interesting direction: for example, Kevin Pollak telling it as Christopher Walken would, or the mime and card-shark versions. Or even Silverman’s variant; she claims to have been part of the act, and ends by stating she was raped by a major theatrical agent. However, perhaps the most memorable is Gilbert Gottfried (the parrot’s voice in Aladdin!) at a roast of Hugh Hefner shortly after 9/11. His humour on that topic went down like the Twin Towers, so he switched to a rare public telling of the joke, as if to say, “Think that is tasteless? Try this.” More such social context or discussion – is it offensive? amusing? both? – would have been preferred to additional helpings of empty obscenity. Occasionally interesting, but disappointingly unfunny.